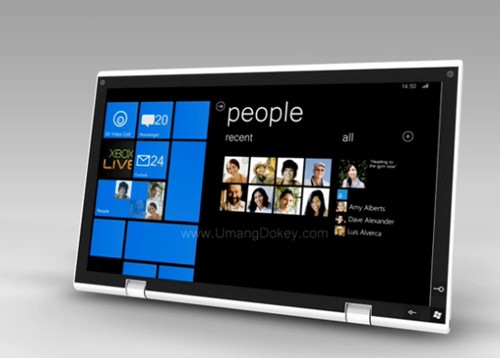 Well, that didn’t take long. Details for Windows Phone 7 Series aren’t fully revealed yet, but already there’s someone thinking about running it on a slate tablet. Looks pretty slick. However, given what we know, it’s something we won’t be seeing, at least for a while.

Designer Umang Dokey envisions taking the “three screens” of WP7S and unrolling them across an 8-inch tablet with capacitive touchscreen. It would also have dual webcams for 3D videoconferencing and two joysticks on the back for gaming and scrolling. To make it tabletop friendly, there’s also a stand that folds out from the back and can rotate to the front as a keyboard.

There are some design problems that need to be worked out, like how that hinge must be right up against the LCD frame and how to stabilize it when the keyboard is flipped forward. Also, I’m always wary of running an OS designed for a certain screen size on something much larger or smaller without seeing how it will be modified. But given the strict hardware limits on WP7S, we won’t see something like this any time soon anyway. Still, it’s nice to dream.