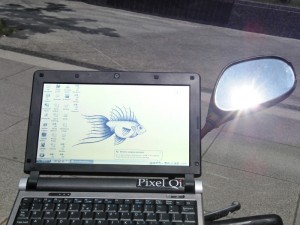 Remember Pixel Qi? The makers of that very cool transflective 3Qi display that allowed for full color in LCD mode and an outdoor readable gray-scale screen might have just gotten a big leg up. The Notion Ink Adam was the device that seemed to carry Pixel Qi’s flag but it certainly hasn’t become a big seller.

Maybe that’s about to change. Pixel Qi is announcing an investment in its technology and future from 3M. The amount of the investment hasn’t been disclosed. According to This Is My Next… Pixel Qi founder Mary Lou Jepsen believes this may be the step Pixel Qi needs to move its display technology into the main stream.

The Pixel Qi system works by turning off the back light when you want to use the gray-scale screen and many thought it might be one of the next big things for Tablets when we first started hearing about the technology two years or so ago. But apparently the same supply chain issues that have plagued many other manufacturers since the iPad became such a big move has affected Pixel Qi as well. This will be interesting news to watch down the road.

Here’s a link to the press release in PDF format.