An upcoming update to Plague, Inc. will bring new features to the popular iOS and Android game including a Speed Run mode and some extra narrative content.

According to TouchArcade this July Plague, Inc. 1.6 will hit the App Store and Google Play Store, making the game even more fun to replay than it already is. The update will introduce the new Speed Run mode which lets players compete with friends and other players around the world to see who can eliminate humanity the fastest. 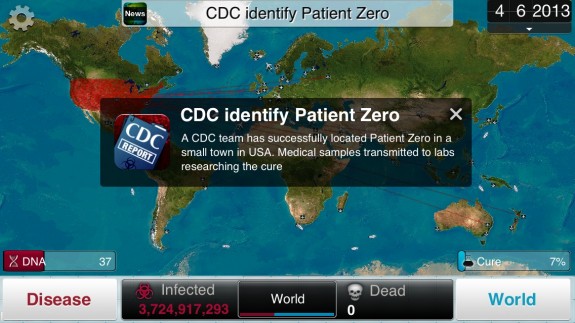 After every game the game will show how the player’s score compares to their previous run with the same type of disease, as well as how it compares to others around the world and their Facebook friends.

The more exciting part of the update is the new Center for disease Control content. After the update the player will routinely get updates on what the CDC is doing to help prevent the spread of the bacteria, virus, spore, worm or other type of disease.

The CDC, for example, will try to track down patient zero of the disease in an effort to better find a cure. It’s not clear how much of an impact the CDC will have on the game, but if nothing else it will give the player a bit more narrative for each game. The CDC will give the player an enemy to work against, or at least put a name to the opposition they face.

Plague, Inc. is currently available in the iOS App Store and the Google Play Store for just $0.99. It’s an incredibly fun game, and well worth the dollar. The game does have several in-app purchases, but they mostly add new disease types such as a Necrosis (zombie) disease that aren’t essential to enjoy the game. The new features will integrate into current game and won’t require in-app purchases to use.