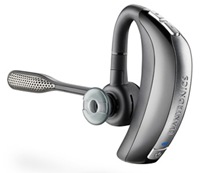 Not to be out done by its competitor Aliph, Plantronics has released its latest BlueTooth headset, The Voyager Pro. Both companies are competing fiercely for a place on the side of your head.

Plantronics promises as much noise cancellation as Aliph’s new Jawbone Prime. There are obvious physical differences as the Voyager Pro looks like a  much bigger device and and part of that is the battery that fits behind the ear and that promises up to 6 hours of talk time and the extended microphone. It doesn’t look as design or Ã¢â‚¬Ëœfashion’ conscious as the Jawbone Prime, but then that becomes a real user choice. The Voyager Pro costs only $99 compared to the $129 Jawbone Prime.

Vincent Nguyen of SlashGear and spent some time with both the Voyager Pro and the Jawbone Prime and has posted some thoughts on both. If you’re in the market for a new BlueTooth headset is thoughts and comparisons are worth taking a look at.