Plastic vs. aluminum. iPhone vs. Samsung Galaxy S4. A new drop test compares the durability of these two devices to see if the plastic Galaxy S4 can survive drops better than the aluminum iPhone 5.

The latest drop test comes from YouTube user TechSmartt who dropped both the Samsung Galaxy S4 and the iPhone 5 from a number of different heights to see how well the two phones hold up. The result is a number of scratches and some broken glass on both devices, though the iPhone 5 survived while the Galaxy S4 did not.

After the first two drops at pocket- and chest-level both the iPhone 5 and Samsung Galaxy S4 have a few dings and scratches on the back. The iPhone’s aluminum shows a number of scratches, while they are a bit less noticeable on the Galaxy S4. The Galaxy S4 also has the benefit of a plastic removable back so users can just replace a the back plate to make their phone good-as-new.

After the third test, however, the Galaxy S4 cracks. The phone lands on the bottom right corner, which cracks the bottom of the screen and the capacitive button. Amazingly, the iPhone 5 survives the same drop with just a few more dings and scratches on its aluminum body.

It’s the final ten-foot drop that finally does in the Samsung Galaxy S4. The drop cracks the middle of the screen and shatters the glass on the camera, which deletes the video of the final drop. The phone still works immediately after the drop, but soon shuts off and refuses to turn on again. 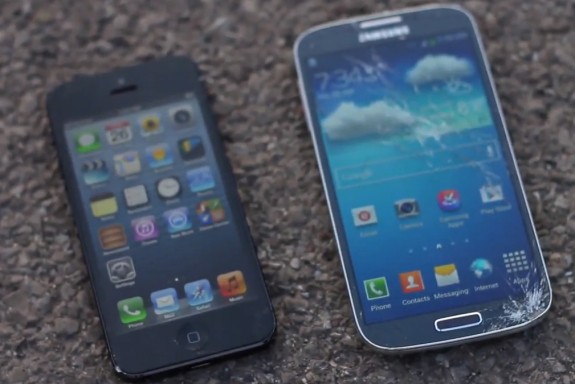 The same ten-foot drop only manages to crack the top glass piece on the back of the iPhone 5, with no damage to the front screen itself.

To finally crack the iPhone 5 screen, TechSmartt runs it over with a car, but that still only cracks the top glass piece on the back of the phone, Everything else, including the sapphire crystal lens is in tact, though the aluminum looks worse for the wear.

The drop tests aren’t exactly scientific, and it could just be luck that made the iPhone 5 survive. Some drop tests show an iPhone 5 screen can break after just one drop, it’s all just luck of the draw. If there is no luck involved, however, the tests show a plastic construction isn’t as durable as an aluminum unibody construction.