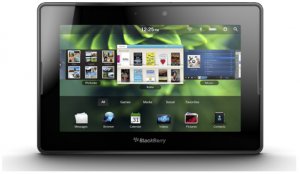 Research in Motion’s first foray into the tablet market is met with lukewarm reviews. For the company’s first tablet effort, the build quality is there—the screen is bright and vivid, the metal chassis feels solid, and the device has a reassuring weight and thickness that makes it subtle, understated yet elegant. So why aren’t reviews glowing? For one, the irony behind the tablet’s PlayBook name is that its company, RIM, still doesn’t have a playbook, or an attack strategy, related to the future of mobile computing.

According to former Engadget editor-in-chief Joshua Topolsky, “I can’t think of a single reason to recommend this tablet over the iPad 2, or for that matter…the Xoom. And that’s what it really boils down to here; what is the compelling feature that will make buyers choose the PlayBook over something else? I don’t have that answer, but that’s not what’s troubling me–what troubles me is that I don’t think RIM has the answer either…and they should by now.”

I had initially raised many of these concerns initially after having spoken to RIM representatives at this year’s Game Developers Conference in San Francisco, Califonria. The three-part videos are embedded below:

In the past, RIM had focused on the enterprise market, which shunned complicated, un-necessary features for security, reliability, and battery life, and these sacrifices typically made IT managers happy, leading them to choose the BlackBerry Enterprise Server to power BlackBerry smartphones over rival platforms that tap into Microsoft’s Outlook ActiveSync technology for push email. However, with the coming of the iPhone and the multiple Android devices on the market, RIM’s corporate-focus is thinning—to conquer the smartphone space, the enterprise-driven platform must now fight for corporate and consumer attention.

RIM slowly began adding features to make its dead simple to use BlackBerry smartphones appeal to consumers, including cameras on the Bold series, the inclusion of a touchscreen on the BlackBerry Storm franchise, better integration of social media features and browsing on BlackBerry OS 6 that debuted on the BlackBerry Torch.

However, these features, like those that will debut on the PlayBook when the device comes on sale next week, weren’t well thought and integrated from the get-go. Rather, they seem to be after thoughts. Take for instance the BlackBerry Torch smartphone, a device that’s been heralded as the best BlackBerry built to date by enthusiasts but criticized as being slow and lacking polish by those who are used to rival OSes—the same user base that RIM is trying to court to switch to its own BlackBerry platform.

While early reviewers are dismissing some of the shortcomings of RIM’s first-generation tablet as issues stemming from the company rushing the device to market. Walt Mossberg of the Wall Street Journal says, “I got the strong impression RIM is scrambling to get the product to market, and that it will be adding other features already offered on competing devices for months, through software patches.”

With the PlayBook there will be some growing pains as RIM continues to evolve its platform rather than start from scratch. Sure, the PlayBook is based on a radically different QNX OS than RIM’s previous smartphone experience, but the UI seems more of an extension of what RIM had done with the recent BlackBerry 6 OS on its Torch. That said, RIM will need to refine its team to deliver knock-out features and make not just the basic underlying OS and UI feel cohesive, but add-on features, apps, and other aspects feel native to the OS.

The company had gone on a recent buying spree, acquiring various different smaller developers and companies to add talent to the platform. It bought Dataviz, a company responsible for the Documents to Go app that brings native Microsoft Office viewing, editing, and creation on smartphones and devices—Documents to Go is one of my favorites for iOS. It also bought The Astonishing Tribe, a company known for creating UIs and helped to form the initial UI on Google’s first Android devices; since Android, TAT has been working on various 3D UIs. There have been other acquisitions, and they too, must find a place in RIM’s strategy.

At this point, RIM has scouted a great team, and has the talent needed to create compelling products. The company, however, still needs to learn how to put that talent into use and how to focus that raw energy. In order to do that, RIM will have to define its audience—will it attack the consumer-centric BBM addicts or will it go and attack the corporate sector? For the latter, the PlayBook really should have launched with native email and PIM applications as right now, the PlayBook still needs to be tethered to a BlackBerry smartphone through a process called BlackBerry Bridge, which will enable the tablet to view emails on the phone.

Moreover, RIM will need to understand what users want and define its platform based on this. With past revisions of the BlackBerry OS, it seems that RIM was just adding features on based on market demand, rather than creating the experience. For example, with the release of the iPhone, in order to compete, RIM had launched the Storm in association with Verizon Wireless in the U.S. That device, with its SureClick touchscreen, proved to be clunky and users did not take the Storm by storm. The BlackBerry Torch is a compelling device, and was a valiant effort in creating a platform that’s competitive with more modern OSes, but RIM failed to capture mainstream attention with a mediocre camera and slower processor. Additionally, the cry of BlackBerry users is that the platform doesn’t have enough apps to support it.

To answer the app question, at least on the PlayBook tablet, rather than investing in its own ecosystem, RIM will just open up the platform so that Android apps can run. While this sounds attractive at the onset as it will instantly give RIM access to a vast catalog of Android apps, it really does beg the question if this is the right long-term strategy as it will not allow RIM bragging rights to claim a catalog of so many apps, like Android and Apple does from time-to-time by boasting about its vast library of third-party apps. Moreover, RIM will just create opportunities for rival platform Android as developers may just not want to create native BlackBerry Tablet OS apps as they can just hope Android apps will suffice.

On top of having what may not be the right strategy, RIM isn’t even launching with that strategy. Reviewers noted that early review units did not come with support to run Android apps, at least at this time, and that the feature will be forthcoming.

Is the PlayBook lustworthy? For me, it definitely is. It’s one of the most polished and attractive tablets I’ve seen, and I personally love the display and the multitasking abilities. It combines the best of Android and webOS into a nice, compact and portable 7-inch form factor, offering users the potential to run Android apps and have the gestures and polish of webOS. Yet, at the same time, it seems that RIM may have gone for glitz and glam and underneath all that gloss, the meat is lacking. Third-party apps are lacking, though it’s understandable as the tablet still hasn’t even launched yet, and at launch there would not be native email or contacts app—that requires a BlackBerry smartphone to be tethered to the tablet. No 3G or 4G model at launch, and the lack of focus may be the tablet’s biggest downfall. In the past, RIM had focused on the enterprise set, but with the PlayBook, the company is instead choosing to highlight games and apps. Again, I would argue that the PlayBook shows that RIM lacks a defined playbook as the apps are now limited and for consumers who may not have a BlackBerry smartphone to tether to, RIM really needs to build a consumer-grade POP/IMAP email client for these users. Even Microsoft understood this as the company had integrated Gmail, Yahoo!, and numerous rival mail clients into its Windows Phone 7 release—all with email, calendar, and contact synchronization! RIM can take a page out of Microsoft’s Windows Phone 7 playbook.

Perhaps most troubling about the BlackBerry PlayBook is its CEO’s outbursts at recent press events. Co-CEO Mike Lazaridis had abruptly ended an interview with BBC when pressed with tough questions stating that his company was being singled out for being successful. Not a good way to handle the situation, and the antics of Lazaridis has some questioning of RIM has a strategy. In an earlier interview with Walt Mossberg and colleagues at All Things D, Lazaridis appeared to be anxious, nervous, and was described to be sweating.

The company’s insecurity was apparent at the BlackBerry PlayBook launch party, when various members of the media had reported that PR reps were switching back and forth between having company representatives speak on stage. Various outlets have reported that a stage had been set up in New York at the launch party, and reps finally made the decision to not have executives speak on stage because they wanted execs to mingle and build relationships at the party.

To be fair, though, the PlayBook is still a first-generation device—and a first-generation device that still hasn’t been released. When Apple had announced the iPhone, it didn’t even come with support for native apps! That didn’t come until later, and look at how popular iOS is today. RIM’s PlayBook is the company’s first attempt, and I think that RIM has the talent and potential to continue to revise the PlayBook through software updates, and come out with a second-generation device that will address all of today’s lingering concerns. The company definitely proves, like Nokia, to be capable of making some of the best hardware. Hopefully, it won’t have to abandon its own home-grown OS, like Nokia, to adopt a rival system, like Android or Windows Phone 7 or even MeeGo.

Once RIM really assembles its talent and finalizes the PlayBook’s direction, I think the company can have a viable tablet to compete with the iPad; it just can’t rest on its enterprise lead that it has thus far maintained in that space through its line of smartphones. Multitasking, 1080p video, HD front-facing and rear-facing cameras, and solidly built hardware shows the beginning of this strategy, and hopefully we’ll see more.