Tablets are for kids. Well, at least watching kids take to Tablets has always been an education for me. Without fear they start touching and swiping and seem to know exactly what to do. Unlike some of the adults I’ve seen who occasionally seem like they need a graduate school class on how to use one. And of course with the holiday season about to burst into full zaniness, there will be parents out there looking for a Tablet they can purchase for their kids. Last year Polaroid unveiled the Kids Tablet. This year they’ve updated their offering with the Kids Tablet 2. There is something to be said for branding and naming that knows exactly who its target is.

The Polaroid Kids Tablet 2 aims to catch the eye of the parents of the youngest of the younger set. It’s bright, its colorful, and it looks like it can be bounced around without taking on much damage. Inside it’s running Android 4.2 on 1.6 GHz dual-core Cortex-A9 paired with 1 GB of RAM. It has 8GB of storage on board and can be expanded via a SD card slot. WiFi connects your kid to your home network. Cost is $149 and the Kids Tablet 2 will be available in Toys ‘R’ Us and online. 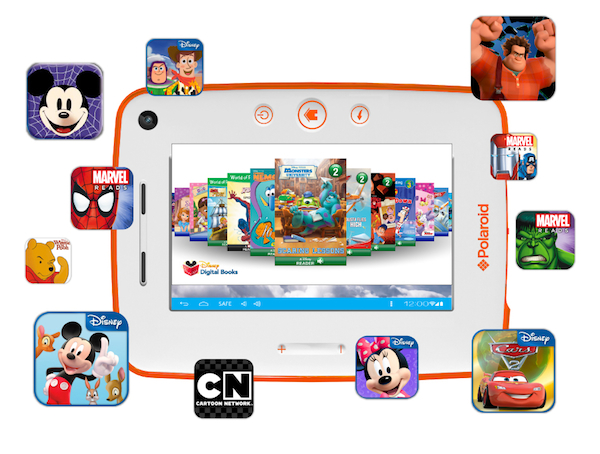 The colorful Tablet features Kids Cam App for taking pictures and video that can be merged with music. There is a DJ Studio App to let kids make music, so your house won’t be free of drumbeats and synth sounds on Christmas morning. Parents won’t have to download Apps on Christmas Eve to get it ready, as the Kids Tablet 2 comes pre-loaded over 70 books and Apps from Disney, Marvel and Cartoon Network and others. Comic book superheroes Spiderman, Iron Man and The Incredible Hulk are there to help children learn to read and games featuring characters from Toy Story, Wreck-It Ralph and Cars are also on board. But if you’re looking for more there is an App Shop for additional content.