Poll: What Would You Cut From Your Budget To Afford A Smartphone?

Nielsen recently released some details of a survey they did of smartphone penetration by age and income bracket. Mashable took note of that fact that young people with lower incomes were more likely to own a smartphone than older, wealthier people. We’re talking people who make less than $15,000 a year.

People in the 18 – 24 age group under $15K are more likely to own a smartphone than people who make $15-$35K, which suggests that the lower income folks are probably on a family plan with their parents or a parent paid for the device. Once you get to the $35K and above income levels smartphone ownership jumps up.

Compare this to people 25 – 34 who make less than $15K a year. They’re 13 points behind on smartphone ownership over the younger group, but penetration is still at 43%, which is not insignificant. Older respondents with low income levels aren’t as hot for smartphones. Then again, neither are wealthy older people. 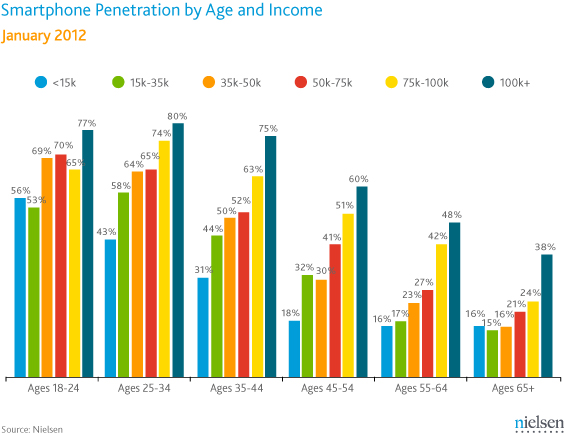 $15,000 a year income is not that far above poverty level, and I can already hear certain pundits claiming that the poor in this country certainly aren’t that poor after all. They have microwaves and refrigerators and smartphones! However, this data actually shows how important smartphones are for people in strained economic circumstances.

I really wish Nielsen would break down this data by race and carrier as well. I bet that many lower income smartphone owners (with the possible exception of the college-age folks) are on pre-paid carriers like Boost Mobile, MetroPCS, and Cricket and that they own those phones instead of a computer. That’s an important qualifier. As expensive as smartphones are, they cost less than most computers. And if a person’s digital life mostly revolves around email, texting, web surfing and social networks, they don’t need a computer.

Even if they’re doing more robust tasks, a smartphone can still create and edit office documents. It’s not the best solution, for sure, and not as easy to do as on a computer, but it can be done.A smartphone can just as readily serve as a productivity device as a communications or gaming machine.

Pre-paid carriers also offer unlimited data for a decent price and no commitments, so if you can’t pay one month, you just pause your service.

This is right in line with what we’re seeing around the world whether you’re talking about emerging economies or lower income people in developed countries. Smartphones are a transformative force that can spur economic growth, innovation, or simply the ability to access information previously out of reach.

This isn’t everyone’s story, of course. People of all income levels deem their smartphones a necessity. I know that I would cut out a lot of monthly expenses before I gave up my smartphone for a flip phone or gave up on mobile completely.

I know I’m not alone in this. Back when we surveyed our readers on their excitement over the iPhone 5, we asked what they’d be willing to give up for the device. The results were… interesting. 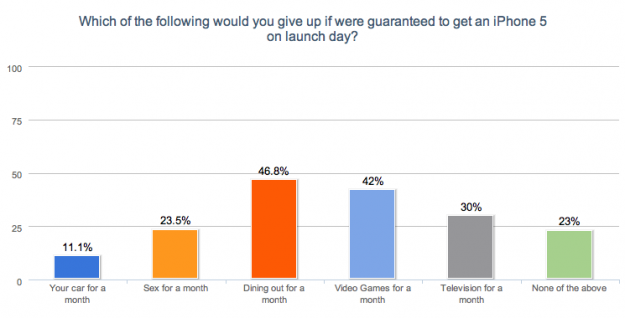 What Would You Give Up for an iPhone 5 on Release Day?

What would you give up in your life or budget before you gave up your smartphone?