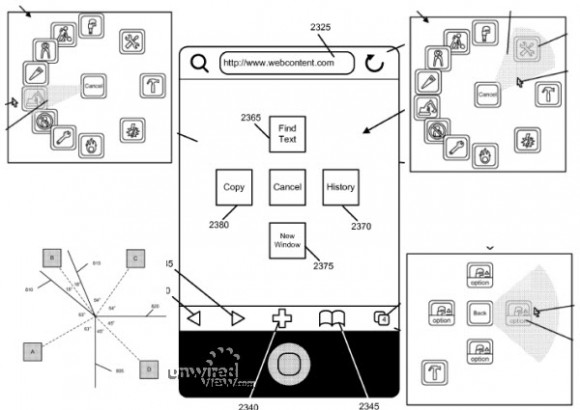 A recent patent filing by Apple reveals a graphic-oriented approach to traditional pop-up dialogue boxes and menus, which are accessed on touchscreen devices like the iPhone and iPad via a long press, otherwise known as pressing or tapping and holding.

Rather than displaying the menu items of the pop-up in a list, like what Android is doing, Apple’s patent would show icons for commands or actions that are available in a circular, radial pop-up box. The user could easily swipe, like on a rotary telephone, around to seek the desired command and swipe out to select the action.

The patent would make iOS even more graphics-oriented and would highlight Apple’s endeavors to make iOS’s GUI evolve even further. Rather than having to read through and scroll through long lists found in contextual pop-up boxes on smartphone platforms, the radial method would highlight actions with popular icons so no reading would be involved. Moreover, because the icons are arranged in a circle, you can see all possible actions right away without the need to scroll through long lists.

Whether the patented graphical user interface (GUI) will make it to the next iteration of iOS or the iPhone, iPod Touch, and iPad is unknown.