PoP Video isn’t the only pico projector available for the iPhone, but it is an inexpensive one that’s easy to carry around in a pocket.

The PoP Video is a small projector that attaches to the dock connector of the iPhone or iPod touch. The projector rests on the bottom of the device, essentially making the iPhone into the projector. There’s no complicated setup required, and the projector doesn’t need to stand on a table, users can just hold it in their hand.

PoP Video appears to only works with its own free app, but that app lets users project a range of content including photos, video, and websites on Safari. Hopefully Pop will clarify if users can mirror the iPhone’s display or if users are limites to this app. The projected image has a resolution of 960×540, which isn’t great, but is good enough for quickly sharing content from the iPhone.

Like all projectors, the PoP Video still needs a dark room if users hope to see the video. It will work on any surface, but a bright room will make the projected image very hard if not impossible to see. 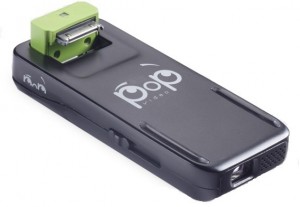 The pico projector can last for about two hours on a full charge, though it’s hard to imagine a scenario where anybody would need to use it for that long at once. The device charges via micro-USB.

Recent rumors say the next iPhone will use a different, smaller dock connector, which means this device might only get a few months of use from early adopters. We still don’t know for sure if the dock connector will change, but it might be worth remembering when pre-ordering the $99 PoP Video.