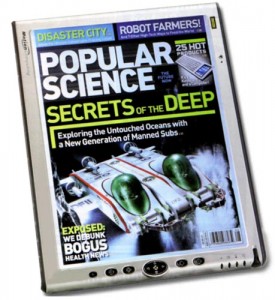 The magazine known to the kids as PopSci (and to me as Popular Science) has a write-up in their November issue about how to turn an old Tablet PC into a DIY Kindle. Well, sort of.

The gist is to buy an old Tablet PC with a D-pad and Windows XP (they suggest an old Fujitsu Stylistic or Motion 1400), tweak the settings for easy viewing and control, and install a variety of eReader applications. Supposedly you can do that for around $200, shaving $100 off the cost of a Kindle, which is a good plan… almost.

Anyone who’s shopped for Tablet PCs on eBay (which, now that I look back on it, is the only place I’ve bought them) knows it’s easy enough to find an old Tablet PC for $200 – you just can’t find one with a fresh battery. That’s fine if you only read around the house or other location with reliable power access. But if you want real mobility, you’ll need to shell out at least $50 for a new battery, probably closer to $100 or more depending on the model, killing the cost savings.

That said, the setting tweaks should be useful for turning your current or new Tablet PC into an eReader. I previously considered doing this in a separate user account so as to keep my configuration and settings in place, but I never got around to it after neglecting to get into serious eReading. Still, for what I do read, my Tablet PC is my preferred device even without tweaked settings.