The Popslate is a new iPhone 5 case that can change its appearance easily with minimal effort.

The Popslate is a thin, rugged iPhone 5 case that adds a 4-inch E-Ink display to the back of the phone which lets users choose what image they want to display to the world at any given time. The case can show any image the use wants, including photos, though it will only show them in black and white.

To change the image on the Popslate there’s an app that lets users choose from their own photos or from their friends’ images. The app can receive or send images to friends, which sounds like a great way to share photos with people. The app can also plug into services like Instagram to easily receive photos of food and beer to show on the back of the iPhone 5.

Constantly changing photos aren’t the only cool things about the Popslate, however. The Indiegogo page also shows images of people using it more productively. For example the case can display the time and date, a recent Instagram photo, a recent @reply on Twitter, and the score of the latest football game. It also shows a user putting images on the display to remind them of their workout routine.

The case uses the Lightning port on the iPhone for power and data transfer. The case doesn’t draw much power because E-Ink is a low-power technology. There’s a cutout for the headphone jack and speakers, but it’s not clear how users can charge their iPhone 5 with the case attached. 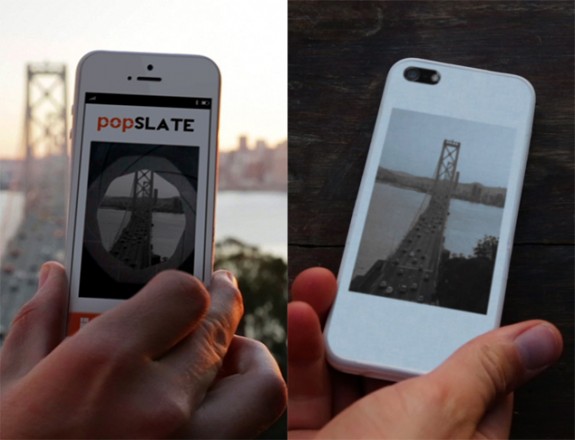 The Popslate is on Indiegogo right now, and the team is looking for $150,000 over the course of 48 days. As of this writing the team has about $20,000 raised. Early backers can get the case for $79. After the 500 early-bird cases are gone the Popslate will cost $99. The team hopes to have the case available to everyone by June 2013.