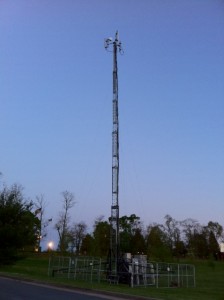 This weekend in Winchester, Virginia where I live is weekend of The Apple Blossom Festival. Although festivities have been going on since last weekend it all culminates with a weekend of activities that include two parades (one of Friday night, one on Saturday afternoon), a circus, a carnival, parties, food, princesses, and lots of drinking. Started over 70 years ago as a way to celebrate the area’s major agricultural economic driver, apples, it is both a community celebration and an excuse for getting nothing done while drinking all week.

Not only does it tie up the town (the downtown is basically closed off for a few days and locals know not to even attempt to drive through it) but it attracts thousands of visitors to the area. Of course in recent years as more and more folks have gone mobile, the crush of people have meant that most of those mobile devices just don’t work with a bunch of folks having folks clogging the networks. As coverage has gotten better here in recent years, it has also gotten better for this event, but it is still difficult using the networks on the big days.

One of my local twitter buds noticed a portable tower set up in one of our parks. Curious, I drove by there last night to see which network set it up. The sign says Shentel, which is the local company that offers Sprint here in our area. We’ll be on the lookout for portable towers from the other carriers over the weekend, but at least Sprint is trying to boost their network for a crush of people.