A leaked set of specs for an unannounced HTC smartphone could be for an upcoming Facebook phone, the successor to the HTC Status and ChaCha.

According to Unwired View the HTC Myst #UL will come to AT&T later this year as the newest Facebook phone from the manufacturer. HTC’s previous Facebook phone on AT&T, the HTC Status, featured a physical keyboard complete with a dedicated Facebook button.

It’s not clear if this phone will have a dedicated Facebook button, but the specs do indicate it probably won’t have a physical keyboard. The leaked spec sheet says the new HTC Myst #UL will have a 4.3-inch 720p display, giving it a pixel density of 320 pixels per inch. 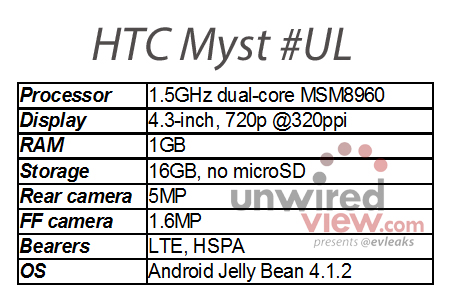 The leak also claims the phone will have a dual-core 1.5GHz Snapdragon processor, 16GB of storage space, and 1GB of RAM. The Myst #UL may have a 5MP rear-facing camera and a 1.6MP front-facing camera. It’s not clear if the camera will use HTC’s Ultrapixel technology or not.

Overall, the specs seem similar to the HTC One S from last year, though the Facebook phone has a higher resolution display.

The HTC Myst #UL may run Android 4.1.2 Jelly Bean with a custom skin. If the phone follows in the footsteps of the HTC Status, it will likely have Facebook integrated into parts of the skin. Or the phone may just use HTC Sense 5 like the HTC One.

Despite the Facebook apps, the HTC Myst #UL likely isn’t an official Facebook phone. The original HTC Status was just a phone that happened to feature Facebook integration. This phone could be the same.

AT&T and HTC will likely release the new smartphone sometime this spring.