In a post to Google’s Google Plus social networking service, an employee may have leaked screenshots of a resigned Google Play Store for Android devices.

Early this morning, Android Central noticed that a post by Eileen Rivera, Production Strategist for YouTube, contained a screenshot of a redesigned Google Play Store. Changes depicted in the screenshot included a slightly lighter color pallet, and icons that focus on each individual kind of content available on the Google Play Store at the top of the app. Games also had the same billing as other content types, which is different from the promotional section where ‘Games’ currently sits in the current version. The post and the accompanying screenshot have since been removed from Google Plus. 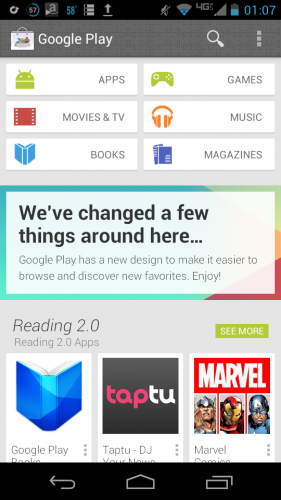 A slightly updated version of the Google Play Store leaked by a Google employee.

Google Play last received a major redesign and update on June 2011. That update included new areas for purchasing books and movies, and more editorial content in the form of curated lists of applications in addition user experience improvements. In March of this past year, Google combined its music services and Android Market to create a unified storefront with Google Play.

Read: How to the New Android Market with Movies & Books

Google Play Apps is available in 36 countries. The apps and games area exclusively for Android devices celebrated the availability of 800,000 apps this past February.

While not the largest application store when measured by the amount of available apps (that title belongs to Apple’s iOS which passed 800,000 apps in January), Google’s Hugo Berra announced at Google I/O in June of 2012 that the company had seen 400 million Android activations to the point. With the exception of Amazon’s tablets, which run Android but don’t have access to the Google Play Store, all of these devices are a potential customers for Android app developers who rely on the presentation and ease of use of Google Play to sell their wares.