The United States Postal Service will no longer ship iPads, iPhones, laptops and other gadgets internationally starting May 16. The USPS ban shipping electronics with lithium batteries overseas begins May 16.

The new USPS regulation is a set back for troops, contractors and others stationed overseas and use APO, FPO and DPO addresses. Private delivery companies such as FedEx and UPS do not ship directly to these government-issued addresses. Instead, government employees and contractors will need to have their gadgets shipped to street addresses in foreign countries. This will be significantly more expensive, especially for those stationed in countries with poor infrastructure.

So why won’t the Post Office ship gadgets overseas any more? The USPS is doing it for safety’s sake according to FastCompany. Lithium batteries can occasionally explode, with experts blaming at least two jet crashes on exploding lithium batteries. Just about every modern gadget packs high-energy lithium batteries, including iPhones, Kindles, iPads and smartphones. New international standards restrict lithium batteries and gadgets containing them from flying in the cargo bays of commercial flights. USPS international shipments typically hitch rides with airlines, riding beneath passengers.

While lithium batteries normally behave just fine, malfunctioning or stressed batteries are at risk. Above is an example of a relatively small lithium camera battery exploding. 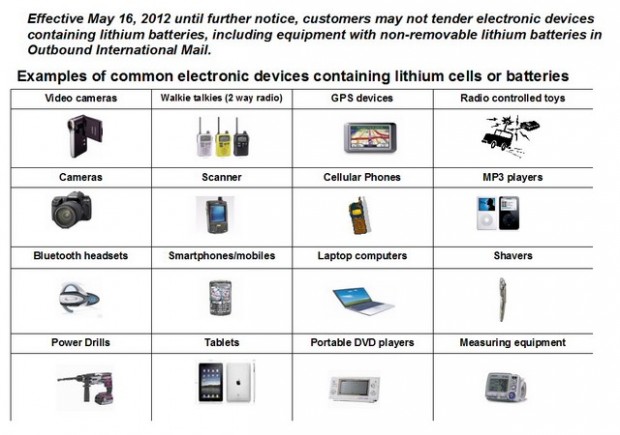 The USPS is not making allowances for smaller lithium batteries. As you can see in the guide above, gadgets large and small are now on the no-fly list. Bluetooth headsets, electric razors and power tools are just a few items that will be more expensive to ship to loved ones. Of course there are plenty of people besides soldiers that need to have gadgets from the U.S. shipped to them. Now there will be fewer options and they will have to pay a premium to ship with UPS or FedEX.

The USPS will continue to ship iPads and other gadgets with lithium batteries within U.S. borders.