The Sony Xperia Z1 just was prematurely announced thanks to a leaked press release ahead of the press event scheduled for September 4 in Berlin. The device, also known by its Honami code name, is designed to be Sony’s flagship phone and a successor to the Xperia Z that was launched earlier this year. Following the Z’s heritage, the Xperia Z1 maintains the sleek look along with the waterproof and dustproof body of its predecessor.

Let’s take a look at what’s new and confirmed.

The leaked press sheet was obtained by XperiaBlog and confims that the Xperia Z1 will boast modern specs worthy of a flagship smartphone, including a 5-inch full HD 1080p display sporting Sony’s TRILUMINOS screen tech and X-Reality for mobile that debuted on the Xperia Z Ultra 6.4-inch phablet. The device will also be powered by the Qualcomm Snapdragon 800 processor, 2 GB of RAM, and a 3000 mAh battery. 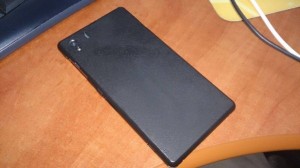 Leaked image of the Sony Xperia Z1 shows off unibody metal back.

Sony will continue to maintain the OmniBalance design language on the Xperia Z1, though this time the design will be built with a unibody aluminum frame. This will give the Xperia Z1 a solid feel, a sleek and slim design, and at the same time allow it to maintain better waterproof protection that the glitchy glue from the original Xperia Z.

In terms of camera performance, the Xperia Z1 will be using a larger camera sensor, which could lead to better dynamic range and improved performance. Rather than using a smaller sensor that’s typical of cameras on a smartphone, Sony will be stuffing a 1/2.3-inch sensor that’s more traditional of point-and-shoot cameras. The blog mentioned that early rumors were “spot on” and Sony is promoting the camera in its release saying “independent testing has confirmed that Xperia Z1 provides the best overall image quality of all leading smartphones.”

The 20.7-megapixel sensor will be based on Sony’s backlit Exmor RS technology.

It’s unclear at this time how the camera will perform, in spite of Sony’s marketing claims, against the Microsoft-acquired Lumia 1020 camera. That camera phone boasts an even larger sensor size than that on the Xperia Z1 and 41-megapixel image quality for “lossless zoom” when cropping. Other contenders in this space include the 16-megapixel Samsung Galaxy S4 Zoom and the Galaxy Camera. Both devices offer uptical zoom, up to 10X on the former and 21X on the latter, and a larger point-and-shoot camera sensor size.

In addition to the camera-centric Xperia Z1, other camera accessories were confirmed, including the QX interchangeable lens system, a Smart Imaging Stand, and Smartphone Tripod. Sony is really focused on imaging with the Xperia Z1 and the accessory selection really shows.

There is also an Xperia Z1 Mini that’s been rumored, and we’ll have to wait and see if Sony will announce the smaller phone with its 720p display alongside the Xperia Z1.

Global sales are expected starting in September and the device will sport measurements of 144 x 74 X 8.5 mm and a weight of 170 grams. Shipping in black, purple, and white, the Xperia Z1 will come with Android 4.2.2 Jelly Bean out of the box along with Sony’s UI enhancements.

The press release has since been removed on XperiaBlog; the site took down the leaked release at the request of Sony.