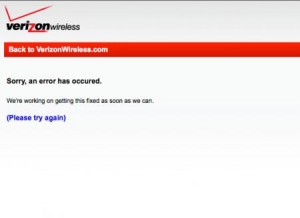 It looks like those who attempted to pre-order the iPhone 4 for Verizon Wireless’s CDMA network in the U.S. are experiencing the same website time-out and error messages that plagued AT&T customers this past summer when the GSM iPhone 4 debuted in the States. According to Business Insider, customers say they were returned with an error page. High demand for the phone and pent up hype for Apple’s flagship phone on what Verizon is describing as “America’s most reliable network” may be the culprit.

Website timeouts and errors during the pre-order process is nothing new, especially in the U.S. Apple’s website, which was used for credit checks and to verify eligibility, along with AT&T’s servers, were the culprit of angry, desperate GSM customers this past June when the iPhone 4 initially launched.

Despite being available for some months now, the iPhone 4’s initial CDMA debut is causing a lot of strain already on Verizon’s servers in the ordering process, which can lead some to question Verizon’s cellular network capacity. While the carrier has mocked its rival AT&T in not being able to handle its cellular network in the past with an influx of iPhone users, all eyes will now be on Verizon Wireless to see if the network could handle the strain as iPhone users start using its network later this month. Early reviews of Verizon’s iPhone, which still is experiencing a network un-strained by the many people who will soon be joining in, say that call quality was excellent and there were few, if any, dropped calls. Walt Mossberg in reviewing the iPhone 4 for Verizon says his only instances of dropped calls were due to calling AT&t iPhone users in the network-congested area of San Francisco, California. Ouch!