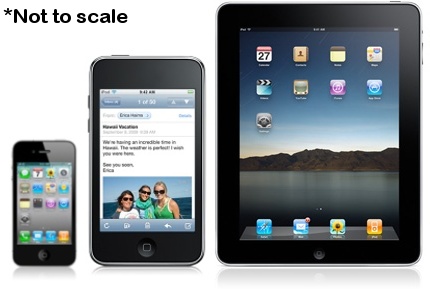 Warner posed the question “How Much Does Size Matter in the Tablet/Slate Universe?” expanding on rumors that Apple is preparing a 7″ iPad. This got me thinking beyond screen size to purpose and screen aspect and then on to branding. And it occurs to me that a 7″ iPad would not be nearly as helpful to Apple as a 7″ iPod.

Think about that size for a second. While it’s certainly possible to shrink an iPad screen from 9.7″ to 7″, doesn’t it seem more logical to double the size of an iPod touch from 3.5″ to 7″? Apple just doubled the resolution of the iPhone with the Retina Display on the iPhone 4. Common belief is that they’ll do the same with the iPod touch, but what if they double the entire display instead?

The main advantages with this would be the ability to run iPhone games at native 640×960 resolution, relieving developers from the hassles of writing for another platform, and watch widescreen video on a larger display with less wasted space or cutoff sides than the 4:3 iPad display. This fits right in with Apple’s targeting of the iPod touch towards gaming and media.

Yes, it seems strange to peg the iPod as the gaming and media device since all the iDevices overlap in these areas to a great extent, but that means Apple has reason to better distinguish the devices from one another. Right now, the iPod touch is being overshadowed by the more feature-rich iPhone and larger iPad. Giving the iPod its own distinct form factor would help set it apart and revitalize the shrinking brand.

One simple thing that would go a long way towards helping that revitalization would be if Apple introduced this larger iPod touch as simply the new iPod. Right now, the iPod brand is split among four form factors without any one of them being called simply iPod. Furthermore, in the line of iOS devices, the iPod touch sticks out with a suffixed name that is commonly, incorrectly referred to as the “iTouch”. A relaunch with the original name coupled with a “Reintroducing iPod” themed campaign would send a powerful message to consumers and competitors alike.

If Apple does resize and rebrand the iPod touch, we’re looking at a unified iDevice front of iPhone, iPod, and iPad, each with its own distinct form factor and strengths. While the iPhone and iPad are titans in their respective markets, the iPod is Sol Invictus of the portable media player market. Amidst growing and stronger competition, a rebirth of their “Unconquered Sun” could be just what Apple needs to maintain their market edge. Again though, just a prediction dependent on IF Apple makes a 7″ tablet.