With The Division release date just hours away, all users finally have the ability to preload the game. What’s more, we’re learning about some changes made to the game since the last beta.

Preloads for The Division kicked off yesterday for owners of Sony’s PS4 video game console. With that preload available, anyone can download The Division on a current-generation console or Windows PC instead of waiting until the game’s official release date tomorrow. Xbox One preloads started last week, with preloads for Steam and Ubisoft’s UPlay client also available.

In The Division, players are tasked with saving what remains of New York City after a devastating virus begins infecting normal citizens. The military quickly moves in, but fails to eradicate the virus. When the military pulls out and the government falls, members of the Strategic Homeland Division cast off their normal lives and set to work protecting the city. The Division is a third-person shooter, with cover mechanics. Character customization and combat mix in mechanics often used in online-role-playing games.

Preloads are strictly for users that have purchased a digital copy of The Division directly from a service that supports the game. The Xbox Store, PlayStation Store, UPlay and Steam allow users to download all the game’s files and some related add-on content so that they’re ready to go when the game’s servers come online. The Division requires an internet connection. Console players also need a subscription to either Xbox Live or PlayStation Plus, depending on which console they’re use.

To celebrate the The Division release date, community managers and developers from the Ubisoft studio that created the game, Massive, are running a live stream on website Twitch. Anyone can watch Massive’s The Division release date stream on the game’s profile page now. Right now it’s a little unclear whether the stream will reveal any of the game’s main story, or stick to multiplayer in the Dark Zone combat area where the game’s best gear waits to be extracted.

According to Ubisoft and Massive, users with digital copies of the game preloaded to their console or PC can begin playing the game immediately at midnight Eastern Standard Time tonight on Xbox One, PS4 and Windows PCs. Anyone that obtains a physical copy of the game will be able to connect to The Division servers at midnight too.

A post on the r/TheDivision, a Reddit Community dedicated to the game, details all the features and changes that Massive was able to make before The Division release date arrived.

The Division’s menus for character customization have seen big improvements since the The Division Beta release a few weeks ago. All items now surface in the menu as a grid instead of the long lists that they once did. Outfit sets let players add all the items of a set to their character at the same time instead of piecemeal. Players can use the Inspect menu to look into each piece of gear’s attributes.

A Help menu gives players a central place to look at all the advice that surfaces on the game’s loading pages. There are new tutorials for some of the game’s more complicated mechanics too. The Turret, a skill that players can pick up to add some additional support for their character, no longer inflicts damage when other players that aren’t rogue step in view of it. 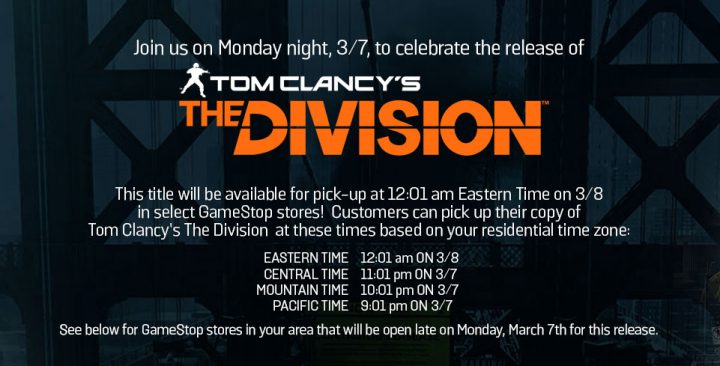 Anyone that pre-ordered a physical copy of the game should be able to pick it up on tomorrow, March 8th. That’s the actual The Division release date.