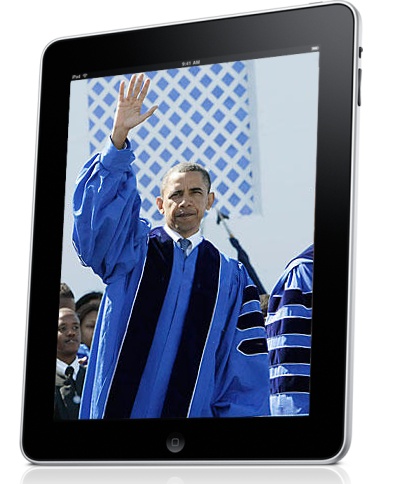 President Obama took a big crap on the iPad at some school in Virginia yesterday. Or at least that’s the impression I got skimming headlines today. Something about media being a distraction or something like that. I don’t know. All I read was “iPad” and was hooked.

From his commencement speech at Hampton University via the Huffington Post:

“You’re coming of age in a 24/7 media environment that bombards us with all kinds of content and exposes us to all kinds of arguments, some of which don’t always rank that high on the truth meter,” he told the students. “And with iPods and iPads, and Xboxes and PlayStations — none of which I know how to work — information becomes a distraction, a diversion, a form of entertainment, rather than a tool of empowerment, rather than the means of emancipation. So all of this is not only putting pressure on you; it’s putting new pressure on our country and on our democracy.”

Can you believe that? Blah, blah, blah, truth meter, blah, blah, blah, iPads, blah, blah, blah, diversion. That’s crazy, right? Outrageous that the president would waste time ranting about iPads and stuff rather than make a responsible statement against the current state of our 24/7 media cycle and the misinformation and distractions it spreads through our always-connected, mobile tech-enabled society. Thank goodness seasoned media is there to direct us to the real story hiding beneath talk of emancipation and empowerment and stuff with headlines like, “Obama Criticizes iPad During Commencement Speech”, ’cause that part’s really important. And now here is a video of a cat using an iPad.

P.S. Yes, that was irony, and so is the fact that media outlets have gone echo chamber, stuffing my feeds with this distracting diversion, exactly as the president warned. Or if this was on a message board: media outlets, YHBT. In case anyone cares, here are two links to responsible reporting on the speech.