All weekend CBS and its news magazine 60 Minutes have been teasing a special surprise that would be unveiled during an interview with Amazon honcho Jeff Bezos tonight, Sunday December 1. Of course speculation on the Internet was rampant. Especially after the teaser showed noted and usually unflappable interviewer Charlie Rose walking into a room and being astonished by what he saw.

So, what did he see? Turns out Bezos and Amazon have been working on drones that would someday be able to deliver packages to your doorstep within 30 minutes or so. Amazon is calling the experiment Prime Air. The following video shows you how the whole thing is envisioned once it gets off the ground.

Don’t expect to see drones delivering packages anytime soon. As the Amazon Prime Air webpage points out government regulations will need to be cleared up first. But the vision is that “one day, Prime Air vehicles will be as normal as seeing mail trucks on the road today.” 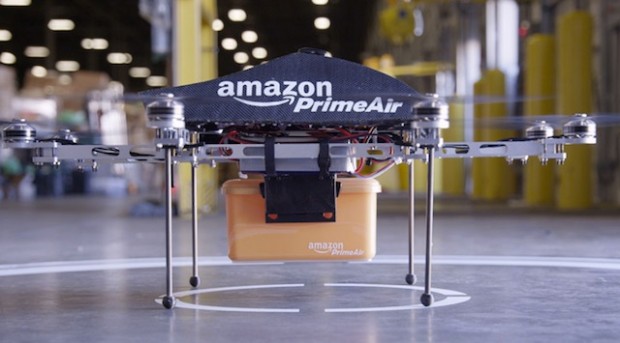 Maybe, maybe not, in addition to government regulations it would seem like quite a few other things will need to be thought through before this idea flies. We might see delivery trucks as common place today, but I can think of a few neighborhoods, both urban and rural, where some folks might have fun shooting at these things flying around on their way to your house. But could GPS or other navigation tech really be affordable enough to keep small drones from running into utility wires? Amazon makes a point about public safety being a priority in developing its drones. That’s all well and good, I guess. But I think many would be a bit nervous about seeing one of these things landing in their neighbor’s yard.

But, maybe I’m old fashioned. Bezos certainly has the cash to dream and push for what it wants. I’m just not sure we’re ready for a world filled with drones delivering packages scooting around our skies just yet.