Projectbook, which has quickly climbed to become the best selling productivity app for the iPad in Apple’s App Store, has just received an update to bring user requested features. The app is being dubbed a notebook and to-do manager for the iPad to help users stay organized and keep track of all their notes and files and operates similar to how Outlook’s calendar and Microsoft’s OneNote works on Tablet PCs of yore.

Projectbook, an iPad notebook and to-do manager, keeps you organized even when you run out of time to organize. Projectbook holds notes, to-do lists, Word docs, PDFs, web clips, sketches, and photos together in one app. It manages to-dos and projects, and automatically links related information so notes and documents can be found even without user generated tags, folders, or keywords. Unlike many other mobile productivity apps, Projectbook does not require an Internet connection, enhancing productivity without subscriptions, server downtime, or connectivity difficulties.

https://youtu.be/UPqjPtGBJSo
Additionally, the introductory promotional pricing of just $1.99 is now also extended to September 7. You can also record voice notes while you type, collect web clips, and import webpages and files. The video above will detail the many features that Projectbook supports. For current owners, the free update, which brings Projectbook to version 1.0.1 now adds the following features:

The company is saying that Mac and iPhone versions are coming this Fall and versions for other platforms are forthcoming. 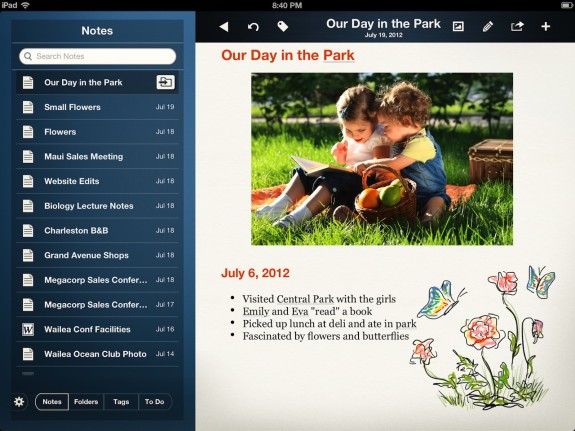