The Prong case for iPhone first debuted in 2013 for the iPhone 5 and iPhone 5s, but now an iPhone 6 version is available, allowing users to easily charge up their iPhones without the need for a wall adapter and cable.

Prong is leaning to IndieGoGo as its funding platform for what the company is calling the PWR case for the iPhone 6, and it’s close to raising its goal of $50,000 in order to manufacturer the new case, but it still has a month left before the campaign ends.

The PWR iPhone 6 case comes in two components. First, there’s a bumper attachment that acts like a normal bumper case, and then the actual charging attachment can clip on and off the bumper case.

The battery pack that’s included with the Prong PWR case is a 2,300mAh battery, which isn’t the biggest battery we’ve seen from recent iPhone 6 battery cases, as there are 3,000mAh options available from Incipio and Unu.

However, the built-in battery isn’t the spotlight feature anyway. The biggest feature on this new PWR case is the built-in prongs that you can flip out and plug into any outlet. 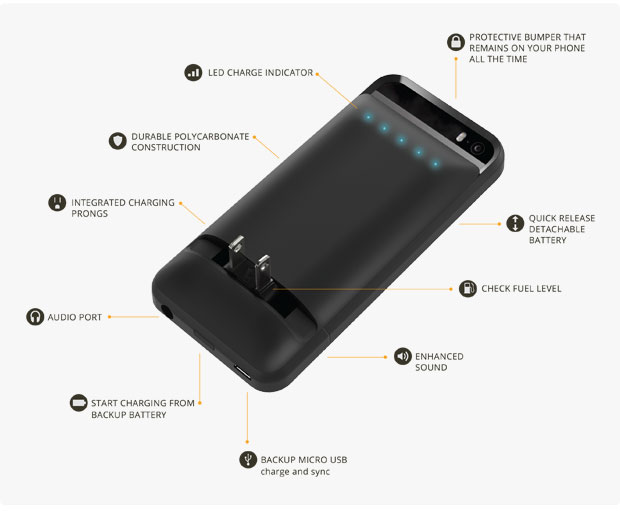 Otherwise, it works just like any other battery case that we’ve used. Your iPhone 6 is fitted into the bumper shell and then it slides into the PWR case and connects to the Lightning connector. From there, you can begin using it and plug it into a free outlet whenever you want.

The early-bird special for the PWR case will have it priced as low as $60, which is quite a steal, but in the future the company says it will retail for $100, so be sure to get in now if you want a case like this. Otherwise, you’ll need to pony up a lot more money in the future to buy one.

The Prong cases are certainly unique iPhone accessories, and while battery cases can be useful, having the outlet prongs right on the case itself is an interesting concept, and one that many users enjoy.