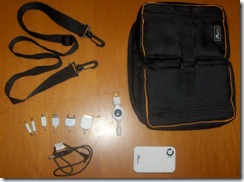 Both the Gadget Bag and the Universal Emergency Charger can be ordered independently, or as a bundle.  In this review I’ll go over both.  The Gadget Bag is a remarkably flexible bit of kit and the Universal Charger is simple and effective.  Together it is truly a case of the whole is greater than the sum of the parts.

Lets look at the Universal Charger first.  In the box there is:

As stated above the USB Charger can be charged of USB.  At full charge it holds 2500 mAh of juice.  How much is that?  Well to give you an idea a 3G iPhone has a 1400 mAh battery so the Proporta Universal Emergency Charger gives you a but under 1.8 full charges.

When I unpacked the charger the first thing I noticed was that it was considerably smaller and lighter than I was expecting.  To give you an idea of size here is a picture of the charger next to the my iPhone. 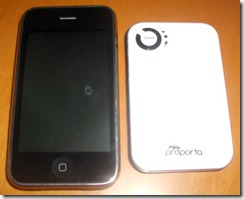 The charger includes a number of LED indicators and a button that allows you to quickly check the remaining charge.  There are three LEDs that indicate the current charge level.  A fourth LED next to the lightening bolt symbol flashes when you have a device plugged into the USB port to indicate that it is charging the device.

There is a USB port on top of the device. This is the power output and charging your gadget is as simple as plugging it this port.  Note the rubber cover that keeps debris out of the charger when it is not charging your toys. 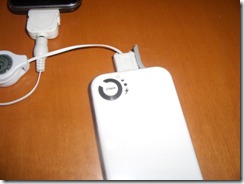 There is a USB cable supplied that is marked USB Input.  This has a small round connector on one end and a normal USB on the other and is used to charge the device.  In the interest of less things to carry I noticed that one of the included adaptors also fits and charges the device.  As you can see below the LEDs indicate charge level when the Universal Charger is plugged in, so it is easy to keep tabs on its charging progress.

My one criticism of the Universal Charger is this Ã¢â‚¬” I would much rather it used the ubiquitous Mini-USB connector for the USB input.  My fear with having a less common cable to charge the charger is losing it, but I know if I lost a mini USB cable while travelling it could easily be replaces at almost any computer store.

The Gadget Bag is a marvel of design.  It is remarkably flexible and very well thought out.

The bag includes 4 compartments and all are lightly padded and lined to protect your gadgets. 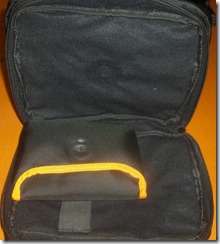 The main compartment is the largest and includes a removable pouch (compartment number 2) that is held in place by Velcro.  There is also an elastic loop that holds the Universal Charger perfectly, but which could also be used for a phone, iPod or similarly sized device.

The remaining two compartments are the external pockets on the lid of the main compartment.

Note on the outside of the removable pouch there is a cable routing port that lets you feed a cable into the pouch.  This would allow you to feed through headphones so you could listen to a device in the pouch without removing it.  More importantly Ã¢â‚¬” when combined with the universal charger Ã¢â‚¬” it allows you to feed in the charging cable and keep your device’s battery topped up while in transit.  If you look very closely at the center of the lid you will see a circle.  This is the internal view of another cable routing port.  We’ll come to that in a minute.

The two external pockets are one of my favourite features. 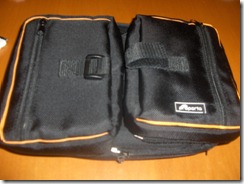 Firstly they are removable.  They simply zip off. Secondly, once removed you see that the back includes a cable port, as does the lid of the main compartment as mentioned earlier. 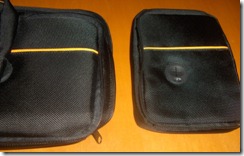 This means that you can run your charge cable from the main compartment to either of the external pockets.

As the icing on the cake if you zip the two external pockets off you can zip them together to make a handy little geek gadget carry bag.  As both external pockets have the cable ports you can also run cables between the pockets when they are zipped together. 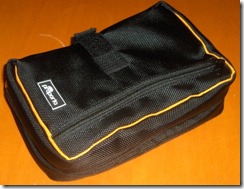 All told this is a very flexible solution.  You can take just the bits of the bag you need and you can get your headphones or the charging cable to any of the four compartments.  It is just so well designed.

To give you an idea of the Gadget Bag’s capacity here it is with my noise cancelling headphones in the main compartment. 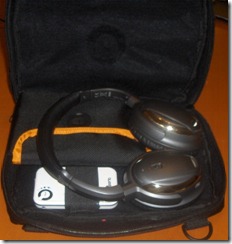 That seems like a pretty useful set of things to take on a long flight.  But that is not all.  I was astonished to find that the main compartment fits my trusty LS800 tablet perfectly.  With the extended battery on it is snug but you can close the zippers.  Add the included shoulder strap and you have the perfect setup for travelling light for a day wandering around a conference. 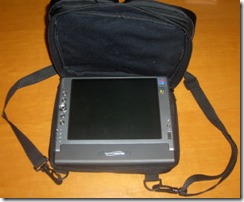 Over all I am very impressed with the quality and the design of both the Gadget Bag and the Universal Emergency Charger.  As I stated in the intro the gadget bag is a remarkably flexible piece of kit and the charger is very functional.  Together they are a fantastic bundle.  Great work Proporta.