Proposed Bill Would Allow Robo Calls to Your Cell Phone 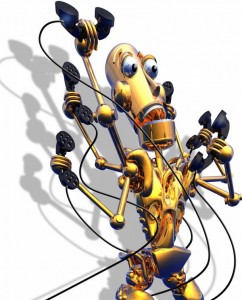 Ah, technology, lobbying, and lawmaking. It’s a wicked brew. There’s currently a bill brewing in the US House of Representatives (H.R. 3035) that would allow companies to make robo calls to your cell phone.

The proponents of the bill say this is necessary because so many folks now use mobile phones as their only phone, and well, there might be important info that they need to reach you with. Backers of the bill include the US Chamber of Commerce, airline, banking, mortgage lenders, and debt collectors.

Yeah, I’m thinking the same thing too. Granted the communications experts are making a good case for this, but I’m sensing this could be the beginning of one of those slippery slopes.

Consumer groups and some states Attorneys General are fighting the bill. I would imagine the bills proponents might have had an easier fight had they put in provisions that would see customers on the receiving end not having to pay for those call or use their minutes. But then, that business model has kept the carriers in the green for some time.

And then there’s this. Does anyone every really stay on the line after receiving a robo call? Is the small percentage of folks who do hang on really enough to make this profitable? The latest trend we’ve seen on our landline at home is that company’s begin playing their messages right away and our answering machine only picks up the tail end of it. That’s all well and good as far as I’m concerned, but I have to wonder about the efficacy and efficiency of the entire business.

Via MSNBC’s The Bottom Line