In case you’re ever stranded on a deserted island, Verizon Wireless and its ad agency are now working on a new commercial for an upcoming, unannounced Motorola Droid RAZR Ultra Maxx smartphone that promises a full two days of battery life on a single charge. Hopefully, in those two days of being left stranded, you’re able to lock into Verizon’s 3G or 4G network and call for help, and while you’re waiting for help to come, you can still surf the web and play games without fear of your phone running out of juice while you’re away from your home charger.

Verizon’s and Motorola’s Maxx series phones have always had best in class battery performance, and it looks like if the advertising claims are accurate, then the Droid RAZR Ultra Maxx won’t disappoint either. 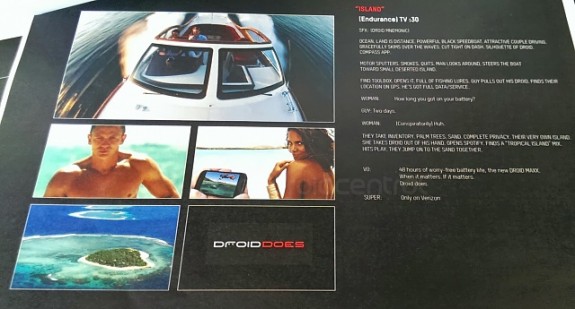 Though the television commercial isn’t available yet in video format, a leaked storyboard of the commercial was obtained by Phil Nickinson of Android Central and shows what the commercial may look like through its 30 seconds of fame.

At this time, it’s unclear if Motorola will stuff an even larger battery into an already hefty Droid RAZR Maxx HD that’s currently available today to achieve battery longevity on a single charge. Likely, the Google-owned smartphone-maker will use clever software customizations to help optimize battery performance. Motorola already has begun work on this through clever profiles through the Motorola Smart Actions software, which can intelligently turn on or off radios to conserve battery life at night if you schedule things to happen.

Motorola had hinted at the All Things D D11 software that it has learned a lot about battery life through its venture with the Maxx series devices and wearables like the Motorola MOTO ACTV sports watch, and that it would be applying those lessons learned to future phones.

In addition to the newly leaked Ultra series, Motorola is also expected to debut a new flagship Moto X smartphone later this year, with fall being the rumored release date.