The Xbox One and PS4 GTA 5 release rumors are back, just days after Watch Dogs arrived on the new consoles to deliver a fix of open world gaming.

Following up on rumors that a PS4 GTA 5 release announcement was coming at E3 in mid-June, a new report suggests many Xbox One and PS4 games for 2014 will be remakes as new games are pushed to 2015 until developers can fully leverage the new consoles.

As Rockstar adds new heists, weapons and cars to GTA 5 with new updates and downloadable content, gamers are eager for an Xbox One or PS4 GTA 5 release in 2014.

GTA 5 and GTA Online are not available on the Xbox One or PS4 right now. Although Rockstar recently celebrated high profits thanks to these games, users who upgraded to a Xbox One or PS4 just weeks after the original GTA 5 release in 2013 aren’t able to play without hooking up an old console. 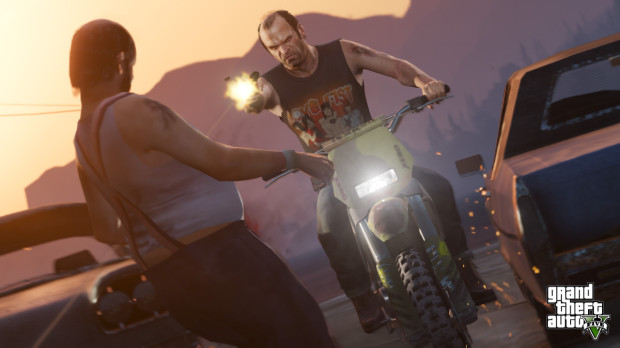 An insider believes a Xbox One and PS4 GTA 5 release could deliver 4 million sales.

The Xbox One and PS4 do not include backward compatibility, so developers that want to sell older games on these consoles need to re-release them as an updated version. It is not as simple as clicking export and hoping for the best, as work needs to be done to optimize the game and the new consoles may offer more power to deliver better looking graphics in a GTA 5 HD re-release for PS4 and Xbox One.

Although there are no details, with a lot of work surely needed to bring together a Xbox One, PC and PS4 GTA 5 game, don’t expect a price break if it arrives later this year.

Ahsan Rasheed, an industry insider that spoke about the Xbox One, PS4 and PC GTA 5 game in early May is back with another claim that Rockstar is working on a port for the new consoles. In a series of tweets Rasheed warns that we will see a lot of remakes this year, but a GTA 5 PS4, Xbox One and PC release is the only one that will sell significant amounts.

The only remaster this year that will sell in excess of 4 million is the one, the only, Grand Theft Auto 5.

Jokes aside, I've echoed this sentiment before- major AAA titles are pushed in 2015 as tools, engines, and programmers get up to snuff.

If people are clinging onto Sunset Overdrive, the Last of Us HD, and Halo ports as the "breakout titles of 2014", I hate to break it guys-

Rockstar already told investors that the company is working on releasing the company’s first Xbox One and PS4 game this year during an earnings call, but executives did not confirm that it is a Xbox One or PS4 GTA 5 remake.

GamePur reports another insider, Shinobi602, doesn’t have confirmation, but imagines a PS4 GTA 5 update is the game Rockstar is working on for 2014.

In the middle of June we will see a large number of game related announcements as Sony, Microsoft, Nintendo and game developers share details about new Xbox One and New PS4 games that will come in 2014 and in 2015. Rockstar typically skips this event, but one rumor claims the company or Sony will announce the PS4 GTA 5 release or details on stage at this event.

Assuming the GTA 5 release arrives later this year, fans of open world games will likely turn to Watch Dogs which just arrived on the Xbox One, PS4, PC and older consoles.

The Watch Dogs map is smaller than GTA 5’s wide open world and it offers a different style of open world game play where gamers must hack the system and can steal from citizens with a hack instead of a beat down. If you steal a car in Watch Dogs the characters can respond by calling the police, but you rarely see police cars throughout the city like in GTA 5.

Watch Dogs also includes an online mode that may compete with GTA Online, though it appears to be a more structured version of multiplayer than in our early GTA Online experiences.