At E3 2014 in June Sony and Rockstar may announce the PS4 GTA 5 game, with an on the stage teaser, which may signal a timed GTA 5 PS4 exclusive that will leave Xbox One fans jealous. Rockstar or Sony may announce GTA 5 at an E3 2014 event according to new rumors.

E3 is the biggest gaming event of the year, where companies like Sony, Microsoft, Nintendo and game makers get together to show off teasers of new games and announce a collection of new information for the coming year. In 2013 this is where we received a lot of Xbox One and PS4 details, and this year we may see a collection of new PS4 and Xbox One games, new accessories and possibly new information about PS4 updates and Xbox One updates that will bring new features later this year.

Grand Theft Auto 5, or GTA 5 was the last major game to arrive on the Xbox 360 and PS3 before the new consoles arrived, and remains unplayable on the Xbox One or PS4. Even before the release rumors of a Xbox One and PS4 GTA 5 release swirled online, but over six months later there is still no release. There is still no word on a PC GTA 5 release either, but if this new report is true it may not be far away. 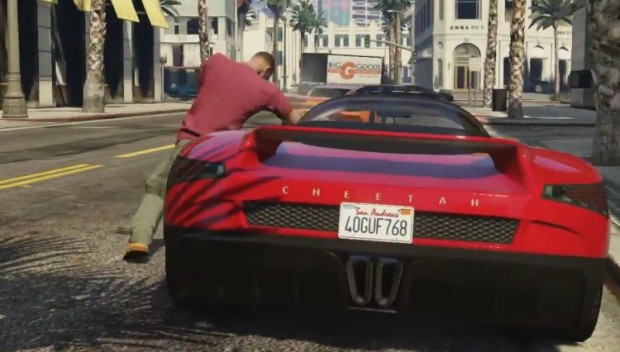 GTA 5 is an open world game that Grand Theft Auto helped make popular, and there is a popular GTA Online component that Rockstar recently delivered a new update to with vehicles and features. GTA 5 maker Rockstar describes this online component as continually evolving to meet fan desires and to grow in scope.

It seemed likely that this focus on a continually developing online model that the company plans to support for the long run would lead to a Xbox One and PS4 GTA 5 release at some point, and it may be close.

In a report from earlier this week DualShockers claims to know what Sony will announce at the E3 2014 press conference and another report from Gamepur with an industry insider backs up plans for a PS4 GTA 5 release as well as work on the Xbox One GTA 5 game and a PC version.

On Wednesday DualShockers shared a big leak with a look at what Sony’s E3 2014 plans are, including the juicy detail that Sony or Rockstar would announce a PS4 GTA 5 game on stage. Some of the information in this report was confirmed by multiple sources. At this point it may be Sony making the announcement or Rockstar could be on stage as well, it’s not clear. The rest of Sony’s E3 2014 announcement includes

The original report includes more details about these games, but was unable to share a specific PS4 GTA 5 release date or if it is an exclusive for any period of time.

Ahsan Rasheed is an industry insider who spoke to Gamepur about many upcoming titles like Halo 5, Agent and GTA 5. Mixed n with a collection of comments, Rahseed claims that the Xbox One, PC and P4 GTA 5 release is coming. Unfortunately, like the other report there is no information on the timing other than a general statement that not all of the information he discussed will be shared at E3 2014.

E3 runs from June 10th through the 12th this year, an Microsoft plans to make their announcement on Monday June 9th at 9:30 Pacific. There is no confirmed time for the Sony E3 2014 press conference, but it may take place later that day. It is also unclear if Microsoft will be able to beat Sony to the punch and announce an Xbox One GTA 5 release date that morning.

Sony and Microsoft are in the middle of fierce competition to sell new consoles, and a timed exclusive could be a major win, even on a game that arrived in late 2013. The GTA series was originally a PlayStation exclusive and reports indicate that Sony almost gained a GTA 4 exclusive, but Microsoft stepped in with a $75 million payment to make sure the game came to the Xbox.

Odds are very good that Microsoft and Sony both worked hard to make sure a Xbox One and PS4 GTA 5 release happens, and it wouldn’t be a shock to hear that both companies paid for the privilege.

For Rockstar, the timing would come right after a Watch Dogs release on all major consoles, including the Xbox One and PS4. While Watch Dogs is not a GTA 5 clone, it is an open world game with a beautiful city to explore and an intriguing mobile component. Rockstar may want to earn gamer dollars yet again, by delivering a PS4 GTA 5 release soon after Watch Dogs comes to market.