PS4 Release Date Could Beat Xbox One By A Month

The PS4 release date could arrive a month ahead of the Xbox One release, adding to the appeal of Sony’s new PlayStation 4, which is already $100 cheaper than Microsoft’s new console.

Sony has not announced an official PS4 release date yet, only promising that the PlayStation 4 will be on store shelves in time for the holiday shopping season.

Previous PlayStation 4 release date rumors pointed to early November and as late as the middle of December, but the latest rumor suggests the PS4 could go on sale way ahead of the competition. 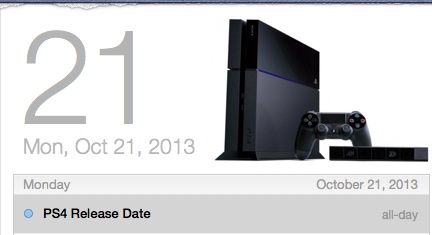 The PS4 release date is allegedly set for October 21st.

According to a retail employee who posts on the NeoGaf forums, The PS4 release date is set for October 21. The user cites a product release schedule that includes an un-named Sony console, sharing,

Our internal product release schedule from head office dropped yesterday and on Oct 21st an unnamed Sony console will be launched. Fyi all console revisions like the ps360 slims and Wii Mini were listed as ps360 & wii mini. Previously the wiiu, 3ds and vita were also only listed as Nintendo/Sony Console in the product name column.

The source is an employee who works at a large retailer, who is verified as someone who could be in a position to know this information. This does not mean the source’s PS4 release date claim is confirmed by site, but that a moderator was able to confirm the individual works in a position where he could come across this information.

At this point it seems unlikely that Sony would be releasing another console, which points to an October PS4 release date. Based on the description of previous console revisions this is not likely a PS3 console revision or holiday bundle.

Previous PS4 release dates included a November 13th PS4 release, which appeared on signs at a Amsterdam retailer. A late October release or a mid-November release would make sense for the PlayStation 4, as it would land in time for major holiday shopping and allow Sony to meet initial demand and restock before Christmas.

A retailer leak claims the PS4 release date is set for October.

The Xbox One Release date is set for November, but there is no specific date from Microsoft yet, only a target of a release before Black Friday. Microsoft just delayed the Xbox One release date in eight countries to maintain supplies for the U.S. and other regions.

If Sony is able to deliver a PS4 release date up to a month ahead of the Xbox One it would be another win for the company, allowing gamers to start playing popular games like Call of Duty: Ghosts, Madden 25 and others faster, without the need to buy a version for a previous generation console.

The PS4 or PlayStation 4 is a new console Sony hopes will lure gamers away from the Xbox 360 and Xbox One this fall.

Retailers like Amazon and Best Buy are no longer taking PS4 pre-orders for the launch console, but there are bundles and standard editions available.