Finding a PS4 in stock as not as easy as locating an Xbox One, but according to a retail employee there will be one last major push at a brick and mortar retailer to help parents and gamers find a PS4 in stock on Christmas Eve.

Sony also took to the offensive today, saying that the company is not holding back stock of the PS4 to create artificial sellouts and a frenzied shopping experience.

Even though Sony claims they are not making it hard to find a PS4 in stock, we are seeing more retailers holding stock for specific days, with Best Buy and other brick and mortar stores planning events that line up with Sunday ads. 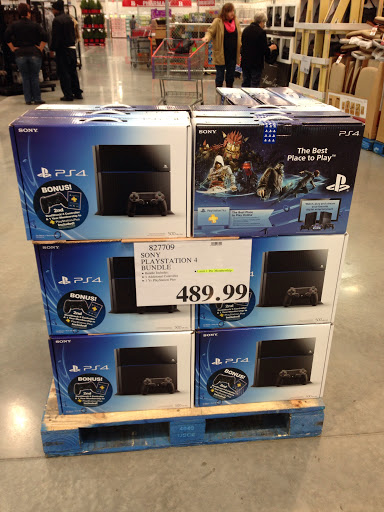 The PS4 may be in stock at Costco on Christmas Eve.

According to a Costco employee in Ohio the retailer is planning for a new shipment of PS4 units to arrive for sale on Christmas Eve. The last minute stock of PS4 units may be similar to the bundle Costco sold at the PS4 launch, with a price of $489 with a year of PSN and an extra controller, but that is not immediately clear. If that is what Costco plans to sell it would be a savings of $20 over buying the items individually.

What isn’t clear from this employee is if this is an official company-wide plan to sell the PS4  on Christmas Eve or if it is simply repeating what management at this store in Ohio knows or is hopeful to know. This is a week away, and Costco is open 9 AM to 5 PM on Christmas Eve, and with many people on vacation this could create a lineup at some stores.

We recommend checking at a local Costco ahead of time, in case this varies from store to store. You will need a Costco membership which is $55 for a year in order to shop at a Costco, unless you want to try a trick such as using a Costco Cash Card, but that may not fly at every location.

For their part Sony is adamant that the company is not holding back stock to make it hard to find a PS4. On the PlayStation Blogcast SCEA CEO Jack Tretton said, “Do you create an artificial shortage because you want there to be a feeding frenzy? No you don’t,” In the transcription from GameSpot, Tretton goes on to state, “You have competition out there; there are lots of things that people can spend money on, especially during the holidays; and the holidays only come around once a year so that’s really when you want to take advantage of the market opportunity.”

Read: PS4 vs Xbox One

In all, it looks like it will continue to be difficult to find a PS4 in stock through the holiday season and into 2014. It is much easier to find an Xbox One in stock at this time.