This morning Sony, makers of the PS4 video game console and services, didn’t just reveal the PS4 Update 3.0 release date. In a blog post the company also broke down every major feature PS4 owners can expect when PS4 Update 3.0 finally makes it onto their consoles. Some of those features are absolutely spectacular.

Sony announced the PS4 Update 3.0 release date and more details this morning in a post on its PlayStation Blog. The post is more of a virtual tour than anything, guiding casual gamers through what they can expect from PS4 Update 3.0 when the upgrade arrives. Users who registered with Sony last month have had PS4 Update 3.0 on their systems for weeks now. 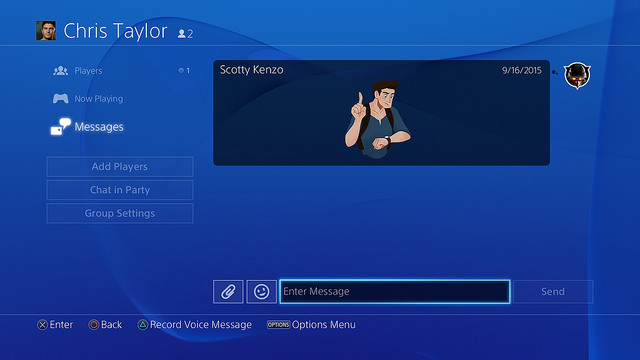 The PS4 Update 3.0 release date is tomorrow, September 30th. From tomorrow on any PS4 console connected to the PlayStation Network will get prompted to install the new software. The update appears to be mandatory for anyone who connects to PlayStation Network to game online or use Sony’s services. Of course, consoles not connected to the internet won’t get the update until they’re able to talk to Sony’s servers.

One of the big features that Sony is calling out for PS4 Update 3.0 is YouTube Livestreaming. For months console and PC games have had the option to broadcast what they’re playing and doing over Twitch, a social networking and video service now owned by Amazon. YouTube has moved to emulate the success of Twitch quickly with YouTube Gaming and this update makes it easy for players to broadcast their footage to YouTube. Streaming directly to YouTube makes a lot of sense. That’s where most internet video ends up anyway. The Xbox One doesn’t offer this feature at all, giving the PS4 an advantage.

Having a PlayStation Plus subscription comes with a lot of benefits on the PS4. The PS4 Update 3.0 doesn’t add any major new advantages to this equation, but does make those benefits easier to identify. There’s a new area in PS4 Update 3.0 that lets users see what games are free for them and where there’s savings to be had.

Community improvements include a dedicated Events hub that makes it easy to spot when a developer has something running for a particularly game. For example, many online games offer double XP weekends and bonuses. This area makes those easier to spot. Groups has new sorting options for users that PS4 owners deem their friends. Communities make it easier than ever to get together too. They’re like creating clans and clubs. Communities have their own profile with discussion boards, screenshots and party management.

There are other little touch-ups too, like the ability to save screenshots in PNGs instead of JPGs. The new file format doesn’t compress images as much, giving players a better looking photo to remember their in-game moments by. On the other hand, they do take up more space.

All told, PS4 Update 3.0 is a terrific update for the PS4, which has lagged Microsoft’s Xbox One in terms of new features. Sony prefers to save major features for bigger software updates a few times a year like Microsoft did with the Xbox 360. Microsoft updates the Xbox One on a continuous basis, adding features as they’re available.

Communities could work out wonderfully for the PlayStation Network. Today it’s pretty hard to maintain a group of friends you’d like to play with. Making large groups of friends easier to manage means the PS4 is a better place to build a large following than the Xbox One.

Microsoft has its own large software update coming to the Xbox One this November. It adds backwards compatibility for Xbox 360 games, but doesn’t include anything like Communities, it seems.