PS4 Users Won’t Get Anything Close to 500GB of Storage

With digital downloads are becoming a focal point for most of the gaming industry as a whole, users purchasing next-generation gaming consoles will need all the storage they can get. That’s why new screenshots allegedly displaying the amount of storage that will be available to PS4 users at launch day is such a big deal.

According to a screenshot taken by a Twitter user who received his console early, users can expect the PS4 they get on launch day to only have 408GB of usable storage. While that’s a pretty large amount of storage when compared to other devices like an iPhone or iPad, that’s positively small considering many digital games downloaded from the PlayStation Store could take up a large amount of space. For example, Geek quotes Killzone: Shadow as taking up 39GB of storage space on the PS4 alone. 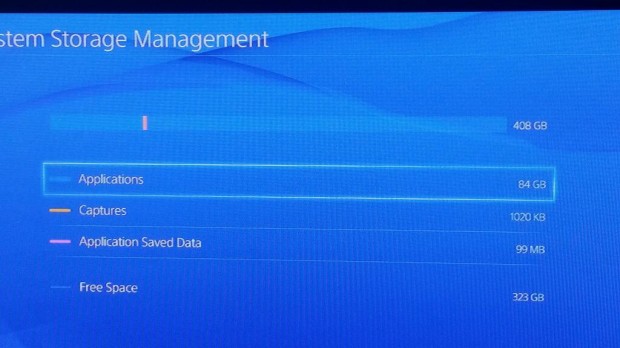 Twitter user CJ’s screenshots of the amount of storage his PS4 has available.

Assuming that every game downloaded to the PS4 will take up the same amount, that’s room for roughly ten games. It should be noted that games come in varying sizes, as such that’s simply an estimate. Unlike the PS3, the PS4 requires that users install Blu-ray based games on the hard drive. However, Sony has confirmed that some games won’t require all the game to be stored on the drive — however that’s up to the developer. Users will also need to download game patches and future software updates. All of that will take up even more space.

Luckily for users, Sony seems to have seen this problem coming. While the PS4 only comes equipped with a 500GB hard drive, users can actually replace that hard drive at any time. That’s a big win for the PS4. Microsoft’s Xbox One also requires that users install games on its 500GB hard drive. Unfortunately, users can’t replace the hard drive inside the Xbox One. Neither console supports USB storage add-ons, even though they both have USB ports.

The PS4 launches on November 15th for $399. That price includes the 500GB hard drive, a power cable, and the new Dual Shock 4 controller.