The PS4 & Xbox One GTA 5 release arrives this fall with updated graphics to deliver all of the fun that gamers experienced last year with better looking gameplay. This release also includes Xbox One and PS4 GTA Online access to the growing online community of GTA players.

GTA 5 for Xbox One, Ps4 and PC arrives this fall, but shoppers can already pre-order the regular version of the game for $59.99.

It doesn’t look like there is any type of GTA 5 upgrade deal for Xbox One or PS4 owners, and with updated graphics and over a year of work it’s not surprising that Rockstar Games is charing full price. The best bet is a trade-in deal at GameStop or Best buy closer to the release.

At E3 2014 Sony announced the PS4 GTA 5 release, and in a post after the event Rockstar confirmed that the game is coming to the Xbox One and PC as well. There is a lot of interest in this game, and unfortunately the Xbox One GTA 5 video doesn’t show much of the actual gameplay.

Although the video doesn’t give us any actual Xbox One GTA 5 gameplay, Rockstar explains what gamers can expect from the updated version of this popular game.

Grand Theft Auto V will take full advantage of the power of the PlayStation 4, Xbox One and PC with across-the-board graphical and technical improvements to deliver a stunning new level of detail. Increased draw distances, finer texture details, denser traffic, and enhanced resolutions all work together to bring new life to the cities, towns, deserts and oceans of Rockstar North’s epic reimagining of Southern California.

Overall this sounds like a more immersive experience for gamers that want to keep playing GTA 5 on new consoles.

The PS4 & Xbox One GTA 5 release date is left open as coming this fall, where it will arrive amidst a wide-aray of games, but ahead of an influx of new Xbox One and PS4 games that are heading to gamers in 2015. Gamers can already pre-order GTA 5 for Xbox One, PS4 or PC direct from Rockstar Games, and we expect to see other options arrive at retailers as the release approaches.

In addition to upgrading the story mode and the city of Los Santos for the PS4 and Xbox One GTA 5 game, users also experience an updated GTA Online experience. This is the part of GTA 5 that offers more replayability that single player, with online heists, competitive modes, apartments, garages and more. The new version includes all of the updates to GTA Online that Rockstar added over the last several months. 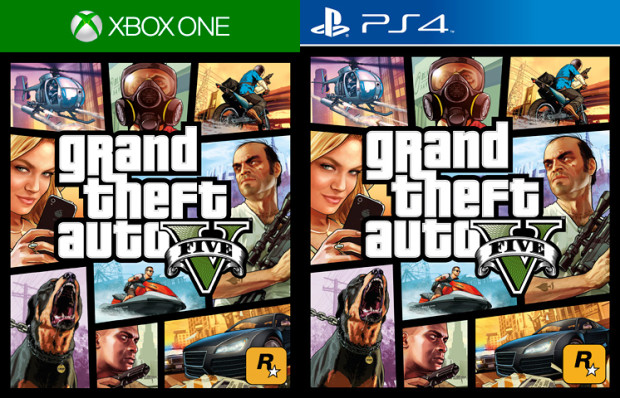 The PC, PS4 & Xbox One GTA 5 release is confirmed and pre-orders start today.

Hopefully Rockstar is ready for an influx of new gamers, and can avoid the problems that plagued the launch of GTA Online in late 2013.

If you started playing GTA 5 on the Xbox 360 or PS3 you will be able to upgrade your game to the PC, PS4 or Xbox One GTA Online experience so that you don’t lose characters or progression.

The PC GTA 5 game will also include a video editor that allows gamers to create more advanced movies and game clips, which are popular on YouTube with big explosions, hilarious setups and incredible jumps.

Rockstar’s timing means the PS4 & Xbox One GTA 5 release arrives roughly a year after the original, and in time for more gamers to own a console. The Xbox One is now just $399 without a Kinect sensor and the PS4 is $399 with various deals dropping the price to $350 already.