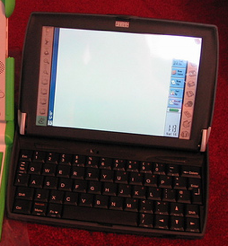 A few weeks ago we saw controversy on the netbook scene; the makers of the original Psion netBook sent word that they were upset with individuals and companies that were profiting from use of the word “netbook,” a term they claim is their registered trademark.   Since a statement was issued by Psion, little seems to have changed.   Major retailers like Amazon and BestBuy continue to refer to devices like the Eee PC as netbooks.   In fact, the U100 from MSI features the term netbook on the side of its packaging.

The Psion netBook appears to have been a device that was created too early for the time in which it was released.   Similar in size to other “netbooks” that are available today, the Psion netBook PRO, a more modern version of the original netBook, came with features that are only now becoming standard on current netbooks.   The netBook PRO was manufactured with instant on, a touchscreen, long battery life, and a full keyboard.

Take a blast from the past and check out the specs of what some are saying started the netbook craze.

Regardless of whether Psion is able to prevent “netbook” from being adopted as a generic term for the current category of subnotebooks, their original netBook and netBook PRO were innovative looks into the future.