This past weekend, Scoble took to Google+ to prove without a doubt that the Google Glass device he’d been sent through the Google Glass Explorers program are water-resistant. He also took the opportunity to declare his adoration for the product saying, “You thought I was kidding when I said I would never take them [Google Glass] off.” 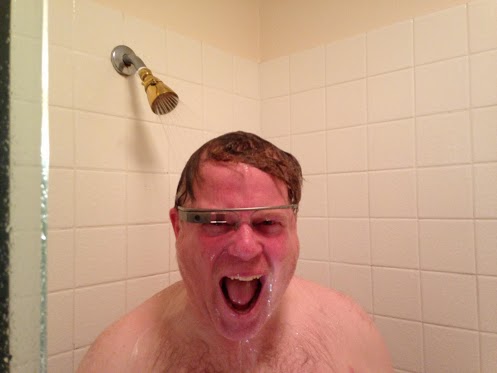 Robert Scoble wearing his Google Glass device in the shower.

According to Scoble, he had his pair on the entire time he was taking his morning shower, and following their brush with water, they still worked.

The stunt comes just a day after Scoble took to Google+ with a two-week review of Google Glass. In it he declared that he’d “never live a day of my [his] life without them” going on to say that the product is “that significant”.

Google’s Glass is the latest in a line of products billed as wearable technology, that is technology that aims to enhance the user’s experience of the world around them by incorporating themselves into the user’s daily routine as easily as possible. Because Google Glass is to be worn, it’s seen as pivotal step into bringing the internet and technology to users anywhere.

With Google Glass users can host Google+ Video hangouts, take photos, and record video all with just a device that’s no bigger than a regular pair of optical glasses. Each pair features a 5 megapixel camera capable of recording 720p video, a NHD display resolution screen with a 640 x 360 resolution, and 16GB of onboard storage. Bluetooth and 802.11 b/g Wi-Fi are also built into the device.  Since there’s no built-in mobile internet connection, users will need to have an Android device that is running the MyGlass application to receive text message notifications, internet access, and GPS functionality.

Developers in the Google Glass Explorer program can pick up Google Glass for $1500. It’s not currently known when the device will be available to the public, though it is expected to do so at a cheaper price.