Nokia has announced that the Notifications API has been released and is now available for third-party applications developer to integrate into their applications for use on the Symbian and MeeGo operating system platforms. The Notifications API is available as a plug-in for the Nokia Qt SDK and allows for apps like instant messenger (IM) apps, Twitter, and other services to send push notifications so that apps do not need to be constantly running in the background.

With push notification APIs available for third-party apps, Nokia is joining Apple, RIM, and Google on bringing push notifications to mobile. Despite APIs available for third-party developers on these platforms, so far only Apple’s iOS platform has seen great adoption of push-enabled apps, ranging from Dictionary.com’s Word of the Day to breaking news push from AP and the New York Times to IM and email push notices. On Android and BlackBerry, only a limited number of apps use the platform’s respective push API.

With Apple’s debut of push notifications on the iPhone’s iOS platform as a workaround for true multi-tasking, I was extremely pleased as it allows me to truly be productive and conserve battery life while mobile. With push, I didn’t need to leave my IM application of choice running in the background. Rather, I can close and exit out of the app, and when a notification came in, I would be alerted and can re-launch the app to chat or be updated on my conversation. According to Nokia:

With the service enabled, applications on Nokia devices don’t need to constantly poll or maintain multiple connections across the network, saving both bandwidth and battery life. This helps developers to differentiate applications so they can more easily penetrate the worldwide market of existing Symbian and future MeeGo mobile users.

IM service Nimbuzz had already attempted to integrate push notification into their app. This is what they had to say:

The Ovi Notifications API was very streamlined and easy to implement as a part of the Nimbuzz app, within a matter of hours we were able to send and receive notifications from our server to the device. 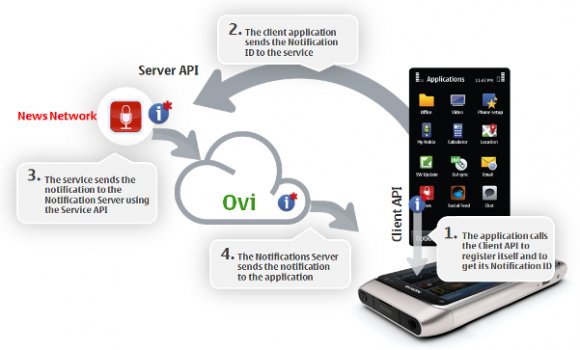 With push notification systems implemented in the background and a potentially great new user experience on MeeGo, we’ll have to see how Nokia re-invents itself in the mobile space in 2011.

Via: The Mobile Fanatics