I have a little bit of a personal pet peeve here to rant about. It’s about the communities rallying fanboys up to load an opinion poll up. I’ve been guilty of it in the distant past, but I see where these type things are counter productive for the poll. Might as well just call the polls, “What fanboy following is strongest today? Send your buddies this way”.

The most recent Wall Street Journal Poll is a clear indication of what I am talking about. Over the years, I have seen many of these type polls have their results ruined by vote pushing from communities.

This is the poll results as of Saturday night when I checked the poll for the 1st time. Apparently, based on a comment on the poll page, Microsoft was way behind and caught up all of a sudden. Typical. The commenter mentioned that WSJ should investigate the source of the sudden votes too. I have news, the votes are from fanboys being pushed from Windows Phone/Mobile fan sites linking to the poll. They are asking their readers to go vote to show their support. Do you really think the Wall Street Journal cares about the integrity of this poll? I’d guess that they don’t care at all. They are getting traffic and that’s all that matters.

The 2nd graph shows what one day can do to one of these polls. I have searched around a little and found at least 2 notable sites that have pushed people towards this poll. You see the difference? I guess the iPhone sites haven’t picked up on the poll yet or maybe they just don’t care anymore.

What is funny about this particular poll is the fact that 10200+ people voted in the poll for Microsoft and the OS isn’t even out in the US. I doubt 10,000 people have have Windows Phone 7 devices right now.

For the record, I didn’t vote in this poll.

UPDATE: Here is a screen posted on Android Central before Windows Phone 7 fan sites linked the poll (thanks drphysx): 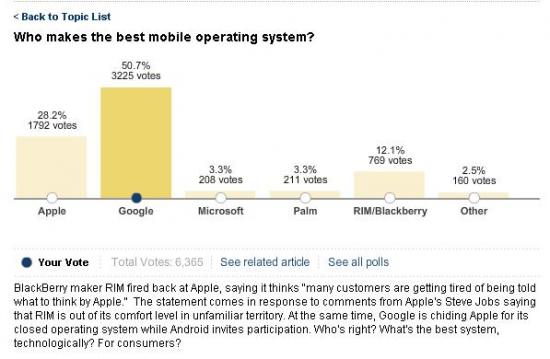