Let’s get this straight: I’m about as loyal an Apple acolyte as you’ll find. The first computer I ever worked on as a kid was an Apple IIC, and as of this writing, I own a MacBook Pro, an iMac, a retina display iPad, an iPod, an iPod shuffle, and an iPhone 4S.

But for all the swooning over the iPhone 5S and 5C this week, I’m staying put with my squat-screen smartphone. Yes, I know: My contract with AT&T is up, and I can get 64GB of golden iPhone 5S bliss for a mere $399! Then I could sell my old iPhone on eBay, wait for the money to clear from the sale and …

Nope. Not gonna do it.

Some techies can have a mean streak about them, and I’d anticipate some volley of insults hurled my way about a) being a luddite, b) too ignorant of the 5S’s advances, or c) too chicken to be an early adopter. None of those hold any water, as I love my tech: I’m also a self-taught audio engineer who recently mixed a cut for the Disney film “Prom,” and scored an indie film in March on GarageBand. (Chicago’s Apple Store has also featured me as a guest speaker in its amphitheater.) 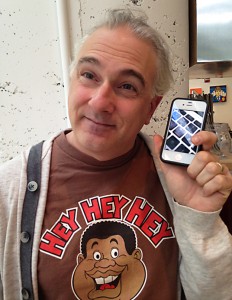 That said, I’ll admit my arguments about not going for the iPhone 5S will deviate from the current stream of Internet chatter. I’m not going to debate whether the fingerprint sensor is sexy enough, or if this new round of Apple advances marks a logical tipping point to ditch my 4S.

Instead, I want to stress this point: Sometimes, very good is good enough. I don’t need a larger screen. I don’t need all these 5S improvements as much as I need to spend my dough judiciously. My 4S rarely drops calls, has fast Internet, and 64 GB of storage space, thank you very much.

What’s more, the appetite for consumer tech always runs the risk of chasing its tail until we enter a state of permanent dissatisfaction with the devices we already own. Think back to when cellular phones were as big as crowbars, and about as heavy. If someone told us then about the iPhone 3Gs, but warned that technology would only ever take us that far, how many of us would’ve scoffed? We’d have kissed the ground and begged Steve Jobs to rain down silicon manna from heaven.

OK, I never liked my iPhone 3Gs much–and complained about its dropped calls and terrible performance bitterly in this piece I wrote for AOL in 2010. But that’s much different compared to 2013. I’ve never stopped to ask myself: “Hmmmmm. I wish this iPhone 4S had more to it. When’s that update coming out?

Sometimes–and this shell game dates back to long before Mr. Bell called urgently for Mr. Watson–we’re perfectly happy with what we own until we see a shinier version of it. Then, the just-fine tool we have suddenly absorbs a tarnish of digital (and materialistic) obsolescence. Maybe Apple sensed this when they put out a phone in gold. As in: “Hey, I know my iPhone 5 is pretty darn good …but I want a gold one.”

And other times, it’s a matter of being resourceful enough as a techie to get by without an iPhone … that is, any iPhone, or smartphone, for that matter. In this post, Pablo Defendini writes about he brilliantly sidesteps the whole mobile phone system by using a combination of his 5th generation iPod Touch, a basic data plan, and a Karma hotspot. (He also implements an iPad Mini or a MacBook Air when the mood strikes him.)

Asked about the iPhone 5S, Defendini replied, “Actually, the camera improvements are a big, big attractive for me. I’m a terrible photographer, so every bit of heavy lifting that the software and hardware can do helps! That would be a reason for me to buy it. But at the end of the day, it would mean that I’d have to sign up for an expensive data-and-voice plan, which I have no need for.”

Meanwhile we must ask ourselves if Apple’s gadgets, or anyone else’s, are truly getting any better, or just newer. There’s one score, at least, on which iPhones are getting worse: DIY repairability. I recently interviewed Kyle Wiens of iFixit.com, and he listed for me the 10 least repairable gadgets he’s ever encountered.

On that least repairable list, six items were Apple products, including the MacBook Pro Retina 15 in., which he slammed as “designed to fail.” It’s too early to know what he thinks of the new iPhones, but I’ll be sure to check in with him to see how he grades those designs and their innards.

I’ve been having fun with Apple design guru Jony Ive’s quote about the 5C, which he called “beautifully, unapologetically plastic.” Well, my iPhone 4S is beautifully, unapologetically obsolete, and I like it that way. Chasing after all this new tech stuff can be exhausting … and this time around, I’d prefer to wait out the materialistic madness until this cool little white phone of mine serves out its useful life.

That is, until Apple introduces a 5S in sea foam green.

Lou Carlozo, a contributor to GottaBeMobile.com, has a signature on his iPhone 4S that says “Sent from my iPhone 6.” Of the 1 in 20 people it fools, more than half are from the high-tech intelligentsia.