While Qualcomm’s high-end Snapdragon S4 processors on many high-end Android smartphones released in the U.S. today are capped with two cores, it looks like the company is just about ready to roll out a quad-core Snapdragon S4 processor. The new applications processor with four cores are found on Qualcomm’s developer edition tablet complete with an updated Adreno 320 GPU. That tablet is being sold right now for just under $1300. 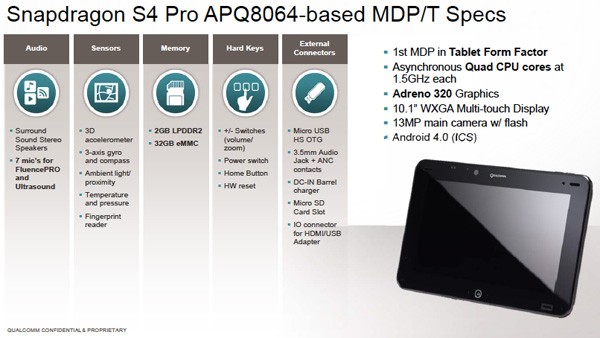 Engadget reports that the four cores are asynchronous so not all four cores need to be fired up at the same time. This is beneficial in saving power when you’re running tasks that don’t require that much power, such as checking emails or sending a text message on a phone, for example.

It’s also the first to feature the Snapdragon™ S4 Pro APQ8064 processor by Qualcomm with asynchronous Quad CPU cores, running up to 1.5 GHz each. The tablet development platform offers powerful built-in graphics enabled by the Adreno™ 320 GPU, which is over two times faster than the 225 GPU on previous Snapdragon-based MDPs. Power management and multimedia efficiencies are also increased over previous MDPs due to the 2GB LPDDR2 RAM and 32GB Storage. The device also features a higher resolution 10.1 WXGA Multi-touch Display.

The reference tablet design targeted at developers come with a 10.1-inch WXGA resolution display along with 32 GB of storage and 2 GB RAM. The tablet also supports a 13-megapixel camera and 7 microphones. The tablet runs on Google’s Android OS.