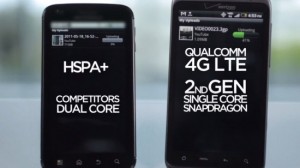 Qualcomm is touting the prowess of its single-core 1 GHz Snapdragon processor, now in its generation, and has uploaded a video to YouTube highlighting that its applications processor is faster than the 1 GHz dual-core Tegra 2 from rival NVIDIA. Is a single-core faster than a dual-core at the same speed?

While on the surface, the video highlights the differences between a dual-core chip from NVIDIA and a single-core Qualcomm Snapdragon, the video is more about the network support than the actual applications processors themselves. Qualcomm is using the Motorola Atrix 4G–which is actually un-named in the video–on AT&T’s HSPA+ network running on the Tegra 2 chipset to compare against the Snapdragon-powered HTC Thunderbolt on Verizon’s 4G LTE network. The result, as Qualcomm highlights, is that web browsing, downloads, and social media (via Internet connectivity) are a lot faster through the Qualcomm chipset.

However, that is not necessarly the case as it’s really the network support that will enable the faster Internet-based tasks as Verizon’s 4G LTE network is much faster than AT&T’s 4G HSPA+ network, though the latter will begin its transition to LTE technology for its network starting next month. The video still leaves it unclear how much of a performance enhancement is achieved in Internet-based task from the single-core Snapdragon chipset compared to a dual-core NVIDIA chipset. Perhaps a more accurate assessment would be a Motorola Atrix 4G and the HTC Inspire 4G as both devices are on AT&T’s HSPA+ network, but even then there are still disparities between manufacturers as Motorola and HTC may optimize their devices differently and both devices consume memory and RAM differently through their respective MOTO BLUR and HTC Sense user interfaces and experiences.

The take away should be that 4G LTE is faster on Verizon than AT&T’s 4G HSPA+, as shown on Qualcomm’s video, not that the sole applications processor from Qualcomm is necessarily better or faster than Tegra 2.

To be fair, though, the video does say that the Snapdragon offers more connectivity option, and with Qualcomm’s baseband support for 4G LTE, the speed war here is on network speeds, not processor speeds. We’ll have to wait for the Droid Bionic with its TI OMAP chipset on Verizon’s network and test speeds in launching applications and also in browsing the Internet when comparing with the Snapdragon when that device launches.