Just moments after Samsung revealed its Galaxy Gear smartwatch, Qualcomm announced a smartwatch of its own called the Qualcomm Toq. It uses the company’s Mirasol low-power display technology, which has had some troubles over the past few years as far as becoming a popular display standard, but Qualcomm thinks that implementing it on a smartwatch may bring the hype back up.

While the Toq has a fancy touchscreen display, it’s a pretty minimalistic device — certainly not anywhere close to having the feature set of the Galaxy Gear, but that means that the battery life is far better, lasting for several days, according to the chip maker.

The Toq has a 1.5-inch display, and the Mirasol technology makes it so that the screen looks bright and vibrant in broad daylight, and there’s very little need for backlighting. Plus, the watch will automatically shut down the touch function after a certain amount of time of inactivity, and will have just a small strip of the screen active for swiping to activate the whole touchscreen when you want to use it. 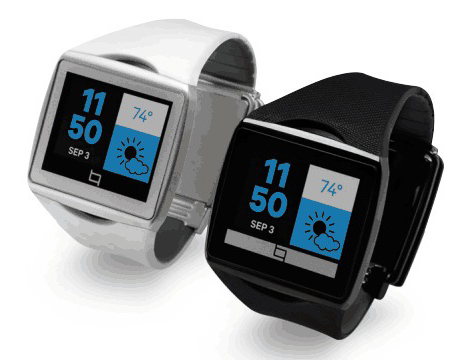 Another way that the watch saves on battery is by just using Bluetooth for all communication between the watch and the phone. This means there’s no WiFi or NFC, and speakers, a mic, and a camera are nowhere to be found. There is, however, an accelerometer, so it’ll at least be able to do some basic fitness tracking.

Qualcomm says the battery lasts around two days, and this is with everything always on. The watch doesn’t have a power or sleep button, so it’ll be able to run 24/7 for two days straight before needing a charge, which is twice as long as the 25 hours that Samsung claims with the Galaxy Gear.

Charging the Toq will be pretty easy as well. It’ll come with a stand/carrying case combo that has a built-in wireless charger using Qualcomm’s proprietary WiPower technology. It looks like it’ll be easy to carry around on your wrist as well. It’s obviously bigger than regular watches, but it’s definitely smaller than the Galaxy Gear. Comfort is a huge factor with watches, so we’re interested to see how well the Galaxy Gear fits onto wrists compared to Qualcomm’s offering.

There’s no word on price of the Toq, but the company says that it’ll arrive at some point in the fourth quarter this year. The watch will come with a pair of Bluetooth earbuds that will accompany the watch as well; no word on whether or not we’ll be able to buy those separately.