We’ve already begun seeing the cannibalization of dedicated game consoles–like the Microsoft Xbox, Nintendo Wii, and Sony PlayStation–thanks to the emergence of cheap games on mobile smartphones and tablets that are readily available for consumption by the casual gaming. However, as mobile hardware becomes more powerful, Qualcomm predicts that new smartphones and tablets running its forthcoming Snapdragon S4 chipset will enable these handheld devices to make standalone gaming consoles in living rooms become obsolete. The company says that game consoles will be replaced over time as smartphones converge their existing functionality with those of dedicated game consoles.

Qualcomm’s prediction comes just as the company had recently unveiled its new Snapdragon mobile chipset branding, with th Snapdragon S4 being the high-end chipset. While the S4 chipsets have yet to be released, they are codenamed the Krait processors, which will be dual-core mobile CPUs based on the 28 nm architecture and will feature a powerful Adreno 225 graphics engine. The company’s emphasis on gaming and graphics comes just as NVIDIA is gaining momentum in the mobile space with its dual-core Tegra 2 chipset found on many high-end Android smartphones and tablets on the market today, including the Motorola Atrix 4G, the Motorola Xoom, and the Samsung Galaxy Tab 10.1.

The company predicts that as its multi-core CPUs with embedded multi-core graphics dominate the smartphone space, developers can create apps and games that will take advantage of the new power, allowing users to have one converged device that they can potentially plug into, or connect wirelessly with, their HDTVs at home and enjoy gaming, streaming videos, and other capabilities. 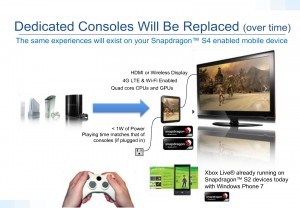 The surge in mobile gaming is perhaps credited in large part to the low barrier of entry on mobile platforms. With free and even cheap $0.99 games on iOS and Android platforms, consumers can make more impulse purchases whereas many game titles available on game consoles cost in excess of $20 or $30 per title. Additionally, with embedded WiFi, 3G, and 4G connectivity, users of smartphones and tablets can fulfill their instant gratification need with a quick wireless download, rather than having to go to a store to purchase a game disc for their console at home.

In the past, game studio Electronic Arts had boldly stated that Apple could compete with Microsoft, Sony, and Nintendo in the game space, and most recently Epic game developer has stated that smartphones will soon outpower home gaming consoles.

In the last few years, smartphones have added newer or improved on existing features that make some stand-alone product categories redundant or obsolete, including cameras, GPS units, PDAs, fitness trackers, and MP3 players and radios. Now, we can begin to add not just portable gaming consoles, but more powerful home gaming consoles that connect to living room TVs to the list of devices that will become obsolete in the future.