Intel’s Developer Forum happening this week in San Francisco, California was largely overshadowed by Apple’s unveiling of the iPhone 5s and iPhone 5c smartphones, but new Intel processors could help the iPhone hardware stay connected to wearable computing devices like smartwatches. At the IDF showcase, Intel CEO Brian Krzanhich had introduced a new processor called Quark, and with “Quark Inside,” Intel could help power the small wearable computing devices while extending battery life.

According to Don Clark of the Wall Street Journal, uses for Quark include wearable devices, skin patches or even swallowed to gather medical data.

It’s unclear if Apple and Intel will work together with Quark on a rumored iWatch. Apple’s iPhone 5s also comes with motion APIs to allow developers to tap into more sensors, which could open the doors for iOS in supporting more types of wearable gadgets. 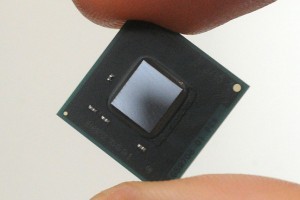 Quark will be about a fifth the size of Intel’s power-sipping Atom processor while consuming about one-tenth the power of Atom.

The wearable computing market is beginning to emerge. Key players so far include Google with its ambition to bring Google Glass, a wearable eyeglasses with a heads-up display mounted over the eye lens, and Samsung with its foray into the smartwatch category with its Galaxy Gear, which the Korean manufacturer says is the first of many in a family of products. Sony also will be launching its SmartWatch 2 later this month and there has also been a number of third-party companies and Kickstarter campaigns to launch similar wearable wrist devices.

Apple, LG, Microsoft, and Google are also rumored to be working on a smartwatch, and Intel hopes that its early endeavors with Quark could help it gain market share in this emerging category. In the smartphone space, Intel is trying to catch up to rival ARM Holdings as it was not as proactive in the mobile computing market with smartphones and tablets, resulting in its Atom processors losing out to designs from ARM.

Devices with Quark inside aren’t expected until 2014 as Intel will only begin shipping reference boards to manufacturers and developers in the fourth quarter of this year.