QUE ProReader on indefinite hiatus, looks like a kill for the iPad 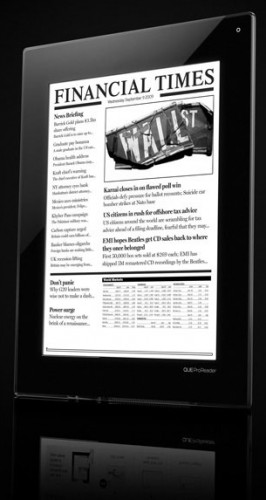 Word from Wired’s Gadget Lab is that the QUE ProReader from Plastic Logic, the ultra-premium eReader with an ultra-premium price tag, has been delayed for an undetermined period of time. They’re calling it vaporware. I’m calling it the iPad’s first confirmed kill.

The QUE, which I caught on video at CES 2010, was a risky venture to begin with, aiming for the high-end of the eReader market, but it looked like they had a solid if small niche to cash in on. Unfortunately, the iPad came along and outclassed the QUE on darn near every level, including price.

As an all-plastic eReader, the QUE still beats the iPad in weight and battery life, but at $799 for the 3G version, it got undercut by the cheaper and much more versatile Apple tablet. Worse yet, the high-end target audience it was trying to reach almost assuredly got lured away by the dazzling iPad.

But again, even without the iPad, the QUE was a gamble, and it looks to be a losing one. It’s a shame they can’t get it into people’s hands because you really need to feel how light and responsive it is to understand why people would want it.