Hi everyone! The latest microphone for review is very interesting. It is distributed by a company named InSync Speech Technologies. This Canadian company has obviously been thinking about tablet computers for quite a while. The microphone is called the Buddy Stylus Microphone.

This truly is a stylus and microphone combination. It is a USB device with drivers that are already built in. Talk about a 2-for-1 device! I have been using this microphone for the past several days in the office and I have to tell you it is a great concept.

I have found the accuracy to be great. It is approximately 97% accurate after several days of good usage to establish user files. For all of you road warriors who asked me to test microphones in a car I have done so with this microphone. This is such a portable microphone it was easily used in my car. The accuracy did not degrade when I used it in the car even though the air conditioning was running at three quarters capacity.

The company’s literature says that it is willing to work with individuals in terms of adapting the firmware to any unique circumstances. They said that they may be able to customize the stylus to suit unique applications.

Both emicrophones.com and Knowbrainer.com sell this stylus microphone for around $200.00. I would absolutely consider this as a great concept microphone. This is the only microphone company I have ever seen that took the needs of the tablet community seriously. 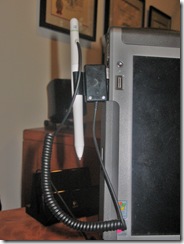 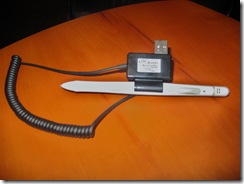 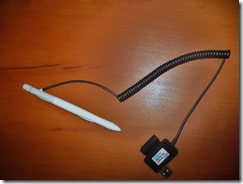