We’ve been hearing about a possible iPhone launch on Sprint for quite awhile now and it appears that those suspicions have finally been confirmed by hard evidence from Radio Shack’s inventory system. 9to5Mac has posted a screenshot of what apparently is retailers inventory system which very clearly shows us a listing for a Sprint iPhone 5 amongst others.

This is important for a few reasons. First, it seemingly confirms an iPhone launch on Sprint. And two, it seems to confirm that Sprint will be getting the next-generation iPhone. Remember, there was a rumor that Sprint might just be getting the iPhone 4.

Interestingly, there is no 64GB model listed amongst the 16GB and 32GB models of the AT&T, Sprint and Verizon iPhone 5 models. If you recall, we heard about a possible 64GB iPhone 5 that might be among October 4th’s announcements. 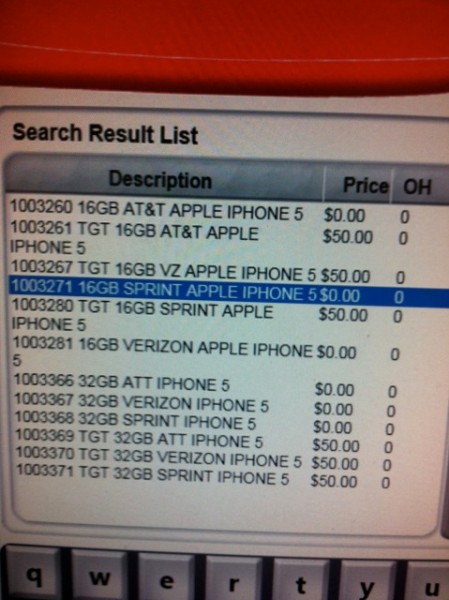 As for the Sprint iPhone, while the carrier hasn’t confirmed it, all signs are pointing to it getting the iPhone for the first time.

Sprint has been making some tough decisions leading up to a possible iPhone launch (killing off Sprint Premier, killing off unlimited mobile hotspot data) and we’ve begun to wonder whether or not the carrier has sold out in order to get Apple’s iconic device.