Today the big day finally came for people who’ve been drooling over the Raspberry Pi mini computer. At 6AM GMT (1AM Eastern) the front page of the developers’ site changed from their blog to a static page with all the launch details, including where people could finally purchase the product.

However, as with all highly anticipated devices, demand far exceeded the stores’ web server capabilities and the two retailers — Premier Farnell and RS Components — suffered major outages seconds after people knew where to go. It didn’t help that neither store gave the Raspberry Pi foundation a direct link to the product page, instead forcing people to search for the product name.

In the end, if you didn’t get on the site within those first few minutes, you likely missed out on ordering the computer completely. About an hour after sales began things calmed down enough for buyers to see that the units were sold out. Bummer. 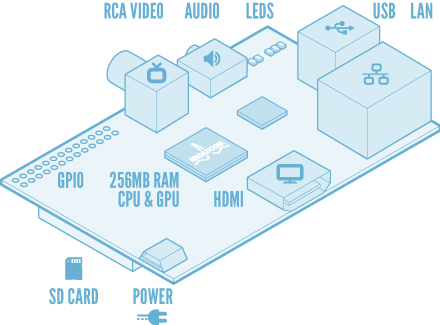 Naturally, people on Twitter got upset over the situation, inundating the @Raspberry_Pi account with tales of woe and blame. A few people tried to pull the “This kind of thing doesn’t happen to Apple” card, but actual facts on that score quickly shut them down. It’s difficult enough to launch a product when you’re a small company with a limited budget. Apparently the people behind the RPi wanted to avoid this very problem, which is why they went with two outside retail partners.

“We *did* warn them that traffic was likely to be pretty enormous,” the foundation tweeted about 4 minutes after the launch. Apparently neither retailer took them seriously enough.

The initial run may be out, but more units are on the way. On the launch day landing page the foundation laid out exactly what’s available right now and what will come later.

As I mentioned yesterday, the Raspberry Pi has two versions, one with an Ethernet jack, two USB ports, and 256MB of RAM that costs $35 and one without the Ethernet and half the RAM which costs $25. The $25 model is now the Model A and the $35 one is Model B.

Only Model B went on sale today due to greater interest. The Model A will sell later in the year with 256MB of RAM as well, still at the same price. The site hints that the Model A will likely come out when the foundation releases the education version of the RPi in the fall.

I appreciate that the site is upfront about the fact that the first buyers of this device are likely to be hardware enthusiasts who will work out the bugs and kinks so that the educational version will end up more refined and ready for kids to use. Plus, this crowd will make cases, accessories, and other stuff for the RPi. Gotta love hardware enthusiasts.

We’ll update you when the Raspberry Pi is ready to order once more.