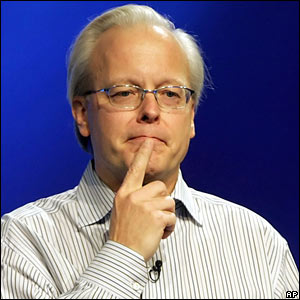 Looks like there’s more shaking up going on at Microsoft. In a letter to Microsoft employees today, Steve Ballmer and Ray Ozzie announced that Ozzie is stepping down as Chief Software Architect. Ozzie assumed the title after being CTO when he was brought into Microsoft after they purchased Groove.

Ozzie’s big push was to move Microsoft into the Cloud, and from Ballmer’s letter you can see that has been going on for five years or so. In Cloud time that’s been a long time, but then Microsoft has been slow to move on a number of fronts in recent years, whether you are measuring them by Cloud years, dog years, or any human time frame. There’s not date for the step down and Ballmer says the position won’t be filled given its unusual status. But then, wasn’t that Bill Gates title? The text of Ballmer’s letter is below:

This past March marked a significant milestone for the company when, in a speech at the University of Washington, I sent a message to the world that we’re ‘all in’ when it comes to the cloud. In that speech I noted that Ray’s Internet Services Disruption memo nearly five years ago, and his work since, stimulated thinking across the company and helped catalyze our drive to the cloud.

As a company, we’ve accomplished much in the past five years as we look at the cloud and services. Windows Live now serves as a natural web-based services complement to both Windows and Office. SharePoint and Exchange have now decidedly embraced the cloud. And by conceiving, incubating and shepherding Windows Azure, Ray helped ensure we have a tremendously rich platform foundation that will enable app-level innovation across the company and by customers for years to come.
With our progress in services and the cloud now full speed ahead in all aspects of our business, Ray and I are announcing today Ray’s intention to step down from his role as chief software architect. He will remain with the company as he transitions the teams and ongoing strategic projects within his organization – bringing the great innovations and great innovators he’s assembled into the groups driving our business. Following the natural transition time with his teams but before he retires from Microsoft, Ray will be focusing his efforts in the broader area of entertainment where Microsoft has many ongoing investments. We have tremendous opportunities in the entertainment space overall, and I’m excited about what we can accomplish. Beyond that, Ray has no plans at this time. While he’ll continue to report to me during the transition, the CSA role was unique and I won’t refill the role after Ray’s departure. We have a strong planning process, strong technical leaders in each business group and strong innovation heading to the market.

While Ray will be onboard for a while, I’d like to thank him today for his contributions to Microsoft, both as a leader and as a long-time Microsoft ISV. As an early ISV, Ray contributed significantly to the early success of Windows. Since being at Microsoft, both through inspiration and impact he’s been instrumental in our transition toward a software world now centered on services. He’s always been a ‘maker’ and a partner, and we look forward to our continuing collaboration as his future unfolds. Ray has played a critical role in helping us to assume the leadership position in the cloud, and positioned us well for future success.

Please join me in thanking Ray and wishing him well.

Via The Microsoft Blog