While the Razer Switchblade concept was an intriguing device with a novel design approach, serious gamers were turned off from the machine because it utilized more netbook innards than performance gaming brains, but Razer is hoping to change that with a new concept and new prototype. Dubbed Project Fiona for now, the company is looking at the Windows tablet form factor, rather than the traditional clamshell notebook design, and is packing in Intel’s latest Core Ivy Bridge chipset to appeal to gaming enthusiasts. 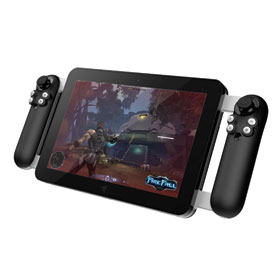 The tablet design itself packs in a 10.1-inch screen, Intel Core i7 Ivy Bridge chipset, and dedicated hardware gaming controllers that are modular and can be removed from the tablet if you don’t want to use the rig for gaming.

Though Project Fiona is a concept right now, Razer is optimistic and saying that consumers can expect to see this gaming device on store shelves before the end of this year. The tablet itself will also be equipped with THX audio and the gaming controllers will provide for haptic and vibration feedback.